Talk about breaking the fourth wall—Faye Driscoll broke all the walls and the floor last weekend! And she’ll do it again this weekend.

Her piece Thank You for Coming starts with five dancers smashing body parts against each other—fingers crunching a cheek, a knee poking into a neck. There is something childlike in they way they disregard, and yet take pleasure in, the flesh of the person next to them—or on top of them. This is happening on a low platform in the middle of the St. Mark’s Church sanctuary. Tethered to each other in a sensual hell/heaven, they reach out to us beseechingly. Should we help them? Will they pull us under? Will we get stuck in the same frantic playground they are mired in?

Thank You for Coming, Faye Driscoll sliding under the platform, photo by Aram Jibilian

At some point Faye Driscoll entered the space and slipped under the platform. I thought she would thump on the surface from below. But no. While the five dancers connected in one long, writhing line and rolled down into the audience like a wave washing up on a shore, Driscoll pushed apart the platform from below, breaking it up into segments—that turned out to be separate benches. The floor that was solid enough to withstand lurches, falls, and tackling embraces is now being deconstructed before our eyes. Where do the benches go? They become our new seats—as Driscoll carries each one to the sidelines. Meanwhile that writhing line of humans is slithering out of their T-shirts and shorts into other clothes (shades of Trisha Brown’s Floor of the Forest) with the help of the audience members they landed on. 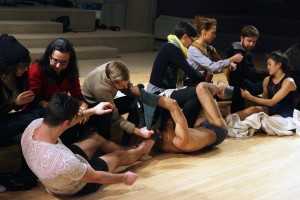 Rolling off the platform into the audience, photo by Aram Jibilian

In their fancier clothes (visual design by Nick Vaughan and Jake Margolin), the dancers now go through manic stop-action motion to effusively greet or skeptically avoid someone. They sustain this hyper—even spastic—mode with superhuman energy for a long time, yet it somehow goes with the mellow guitar played by Michael Kiley.

The space is again turned inside out by a crazy, snaking, bulging intersection of nearly naked dancers and elastic tubing that eventually resolves into, of all things, a maypole dance. Again, Driscoll herself is the subverter and guide, asking people to hold ropes or tubing. And suddenly, the contradictory feelings melt away, the dancers forget their struggle, and an innocent maypole dance ensues, each round gathering more audience members, who by this time are utterly charmed.

Because the dancers were so close to us, because they were so legible in their expressions of contradictory feelings, because the physicality veered toward and away from sexuality, and because you didn’t know what you would be called upon to do, this was the most engaging performance I’ve seen in a long time. With all its anarchy and purpose, it was like the Living Theater of the Sixties.

Thank You for Coming continues this week, March 11 and 13–15. I think it’s sold out, but check out the Danspace website.