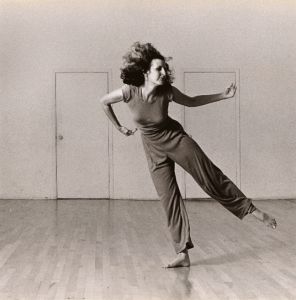 In his latest last gaga session in the U.S., Ohad Naharin emphasized what I will call the three E’s: effort, echo, and engine. I’ve heard him say the first one often, as in “Connect to effort,” or “Connect pleasure to effort.” But this time, at the Mark Morris Dance Center last month, he talked more about the echoes in the movement—allowing the movement to start from one place and be felt in another place in the body. Feeling the echoes is a special pleasure and gives you a sense of connectedness. It’s so different from the ballet aesthetic of keeping your center stable and stretching your limbs away from your spine. 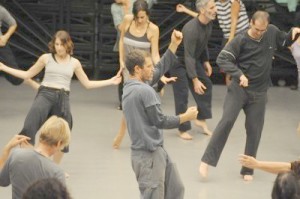 Ohad asks you to “listen to your engine.” I don’t think he means literally to listen to your motor revving up. I think he means be conscious of where your energy starts from. Where is the source of your energy? He emphasizes that the engine may be far from the part that is moving, so he also says, “Listen to the faraway engine.”

He uses the verb “collapse” but he doesn’t want you to collapse down and just drop that part of the body. So he said, “Don’t collapse into air, collapse into water.”

That’s when I thought of Trisha Brown’s ground-breaking solo Water Motor from 1978. Watching the film of this piece, you can see that she is collapsing into water! Gaga is an approach to improvisation, and Water Motor was Trisha’s daring attempt to take the wildness of improvisation and slot it into choreography. She wanted that solo to look as though it were improvised.

Trisha was a brilliant, sly, patient, impulsive, unpredictable improviser. She could evade your eye, like Giselle as a Wili slips through Albrecht’s grasp. She could be dancing with you eye-to-eye and suddenly drop to the floor. Collapse. Or, in Water Motor, she would collapse a hip that would spur a shoulder to lift that would cause a knee to swivel.

Maybe I’m seeing a connection because I watched Trisha make that solo, a little piece of it every day for months in 1977, when I was part of her company. Below is a YouTube clip of Trisha dancing Water Motor, preceded by Trisha and me showing the phrase called Solo Olos from Line Up, which we made with Trisha the year before.

And by the way, my body felt great the day after that gaga class! So you might want to know that MMDC will host another gaga intensive in August.

One thought on “When Is Gaga Like Trisha Brown?”