My presentation to Deborah Jowitt on the occasion of her receiving a Lifetime Achievement Award at the 2016 Martha Hill Awards Gala, held on November 21, 2016.

One quality that is harder and harder to come by in our world is trust. And this is what I find in Deborah Jowitt. I felt it when I was a dancer in her choreography. I felt it when I took the workshop in dance writing from her and Marcia Siegel. And I feel it every time I read her writing—or have a conversation with her.

When I read most dance critics, I either agree or I disagree. But with Deborah Jowitt, I learn something. She notices things—little things, big things— that had escaped me. She enlarges it, she makes it more relevant. She ties each detail to an image that helps you picture it. 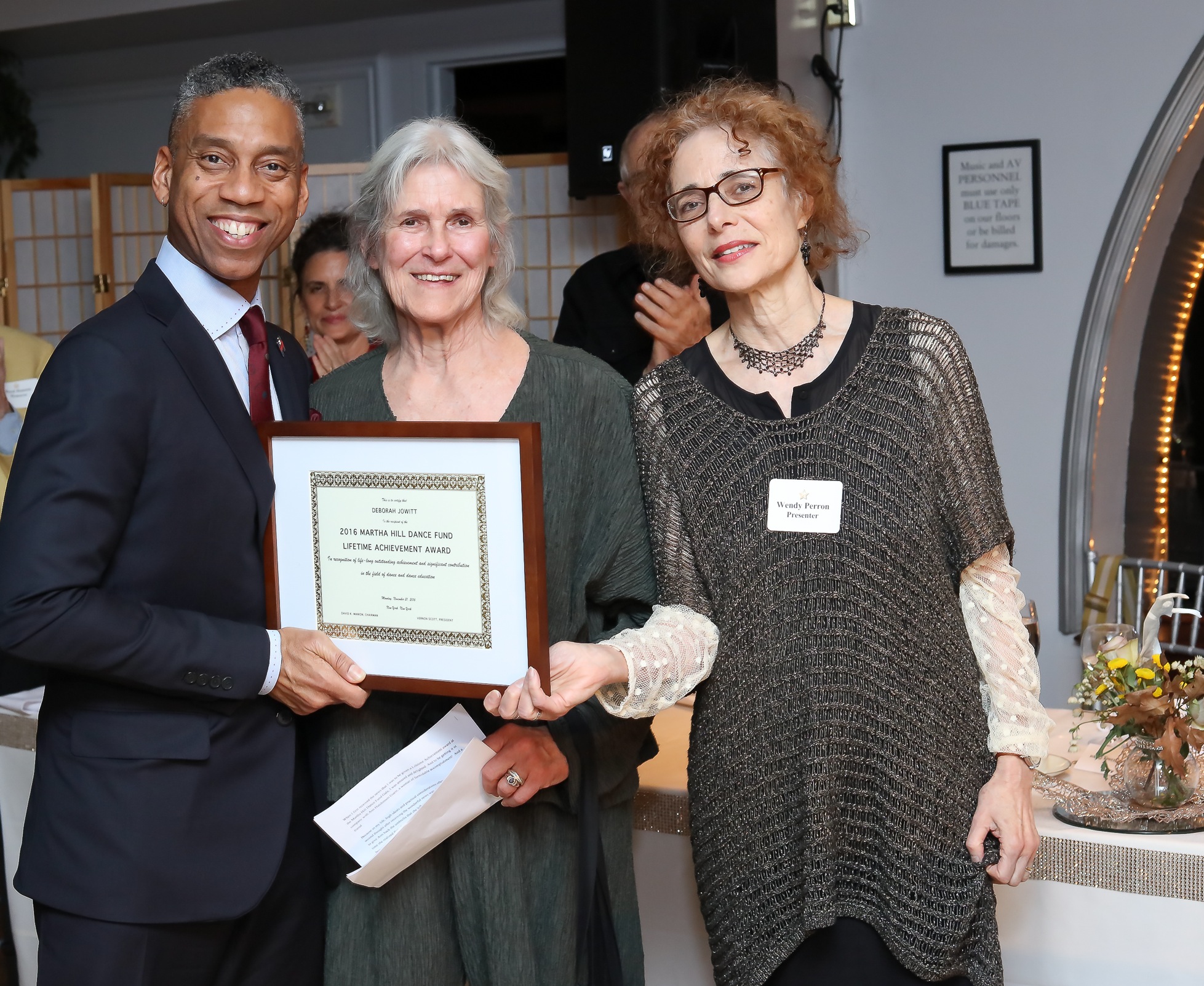 From left: Vernon Scott, president of the board; Deborah Jowitt; me. Photos by Tony Powell.

Deborah has been a beacon of light for dancers like me, who wanted to write. But she has also been a beacon to the whole field. Her current blog a ArtsJournal.com; her two collections of reviews; her decades of writing for the Village Voice that many of us grew up on, her book Time and the Dancing Image, which is like no other book because it tracks changing ideals over time; and her comprehensive biography of Jerome Robbins, are written from love and from curiosity. That’s why she is essential to our field. She has grace, courage, experience, and wisdom. I wish some of the other critics would listen to her words in the introduction to Dance in Mind, one of her collections of reviews: “Long ago I decided that it was pointless to use heavy artillery on small targets.”

Her writing style is conversational, yet also poetic. About Kate Weare’s Marksman, she wrote: “Julian De Leon shapes his body around her, against her, intersecting with her, as if trying—in a dreamy yet probing way— to sense what she’s like.”

Deborah lets you know how perceptions of something onstage change during a performance. Reviewing John Jasperse’s Remains at BAM, she sets up the mood with a lone figure in dimness and then says: “Now in the silence, we see a small miracle. In the muted beam of light, the figure onstage—lying on its side, one leg crossed over the other, its face hidden—begins to glitter with tiny, erratic points of light. What had seemed like a discarded object becomes a treasure.”

Deborah doesn’t announce her opinions. She doesn’t say, “This is bad gender politics.” But the way she writes it, you catch her drift. About Danish Dance Theatre performing Tim Rushton’s Black Diamond, she wrote: “There’s a scene in which Alessandro Sousa Pereira and Stefanos Bizas get Lucia Pasquini between them and start pulling her around—lifting her, swinging her, dragging her. A couple more men arrive to help. There’s a puzzle built into this kind of a scene. The men are nominally in charge, but the woman—while looking desperate and unhappy—actually has to run to them so they can maul her some more.”

She can write about strong emotions with exquisite detail. Here she talks about the dawning of jealousy and revenge in Christopher Wheeldon’s A Winter’s Tale, with the National Ballet of Canada: This is about the dancer portraying Leontes: “When he beats one foot against his other ankle in ballet’s frappé, the move is almost sinister. He crouches and slithers… His fingers creep up his body like spiders ready to infiltrate his brain.”

And she lets the real world in. This is from a very recent posting: “Being at the Joyce the day after the election was an unsettling experience. There were more empty seats than you’d expect at an opening night. I hope Kate Weare understands that many were out protesting or at home mourning, and that those of us in the audience felt our spirits lift a little.”

Deborah’s knowledge of dance is so vast that she can easily link a dance artist to the past, giving us a sense of continuity. Whom or what period does this hark back to? For that reason, and all of the above, she is beloved by choreographers. When Ohad Naharin accepted the Dance Magazine Award in 2013, he wrote an off-the-cuff “Advice to critics” list. Included is this piece of advice: “Make sure you have lunch with Deborah Jowitt at least once in your lifetime.”

I was lucky to inherit Deborah’s Graduate Seminar at NYU Tisch School of the Arts. She has built this course to last. The assigned readings and actions—in a variety of different modes —stimulate the students to be critical thinkers. I always keep in mind, the goal, as she stated it to me: to have the students see deeply into dance.

I will end by quoting from Deborah’s landmark essay “Beyond Description: Writing beneath the Surface.” This essay suggests that you don’t have to superimpose ideas on top of description, that description itself can contain ideas. She writes: “Analogy is rooted in observation—as fluid as the transactions between pond water and fish. In such an ecosystem, everything nourishes everything else. And ideas spring like water lilies.” 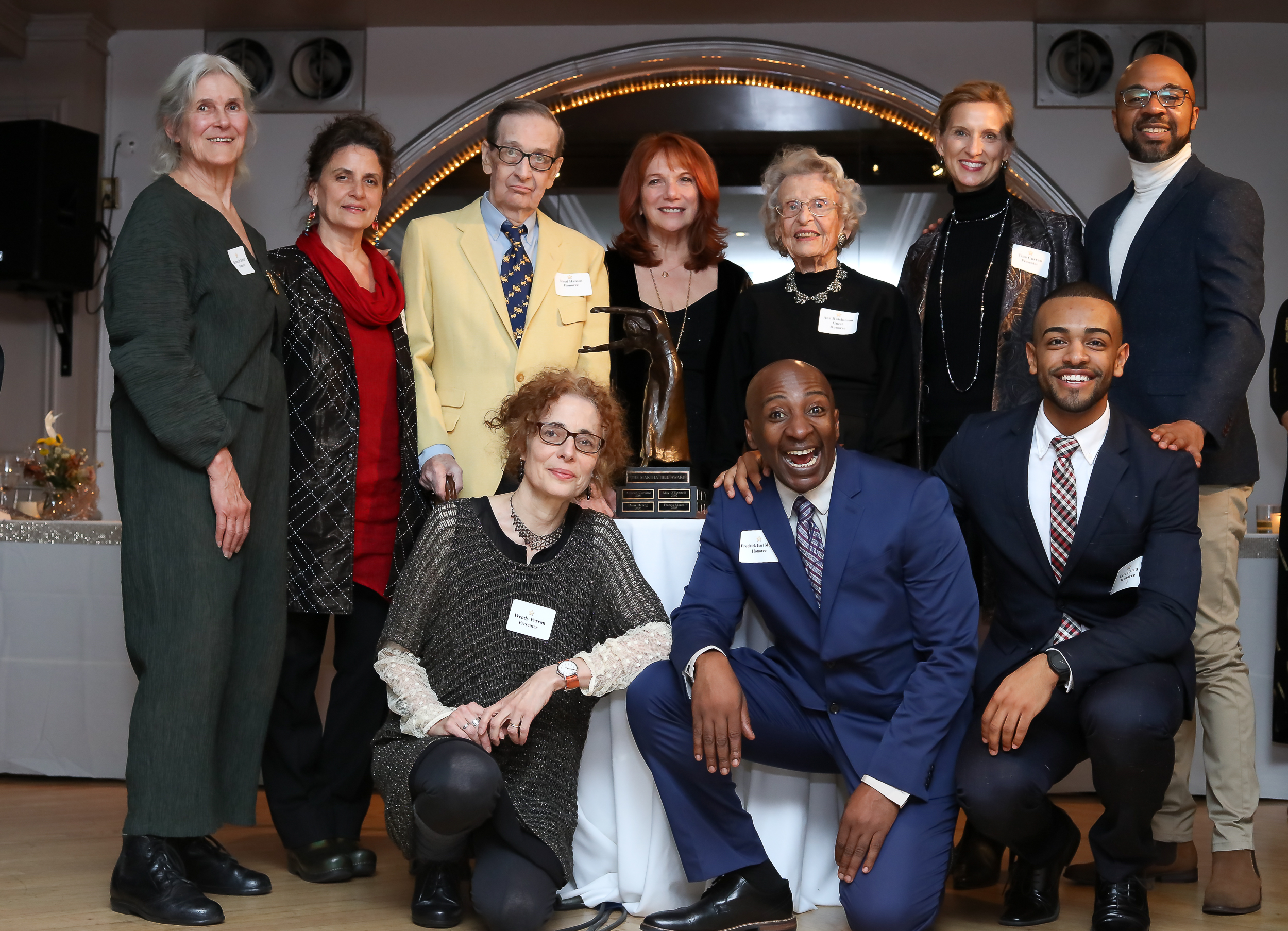