I feel like I’m seeing a new frankness about the dancing body in performance. Some choreographers are shedding the conventions of decorum to reveal different angles of the crotch area, either clothed or unclothed. Perhaps the “private parts” no longer need to be so private. Perhaps they can just be part of the performing body like the feet, face, shoulders, or hands. It’s not about nudity per se. (Nudity itself is nothing new onstage, and I could never emulate the brilliance of David Parker’s treatise on the “epidemic of naked performances” he wrote in Dance Magazine nine years ago.) And I’m not talking about porn or exhibitionism. I’m talking about aesthetics.

In the past, as a choreographer in rehearsal, if you saw a maneuver that exposed the crotch area, you automatically said, Oops, we better do that from a more discreet angle. But times have changed, and what we see of the world has changed. Of the many choreographers who embrace the new frankness, I am choosing three to highlight: Andrea Miller, John Jasperse, and Luciana Acugar.

Gallim Dance founder/director Andrea Miller does not accept certain conventions that still hold sway over many professionals. She recently told me that when she was choreographing for a well known repertory company, the dancers weren’t comfortable with their butts facing the audience. “They always had to cheat how they would get up or how they would move or crawl. They were like, ‘If I get up this way that means my butt’s to the audience.’ They were trying to warn me of a standard they thought I would uphold. I would say “Yes, that’s true. But I’m not concerned about that; it’s a direction we have to face sometimes.’

She explains the difference in outlook this way: “They have a very proscenium, frontal projection so everything they perform is informed by the audience’s perspective. For me everything they perform is informed by the experience that is being captured in this world that the audience is having the opportunity to view. Sometimes I really want to see a body outside the aesthetic canon of entertainment dance and make it more real or cinematic or provocative.”

Miller cited the visual art world as an influence, particularly the famous Courbet painting The Origin of the World, which depicts a nude woman lying on her back with her legs open. “Just studying about that, seeing other artists, contemporary or not” was an influence.

She went on to say, “I sometimes get this feeling that when you train as a dancer it almost feels like you’re learning how to be a geisha—a sophisticated entertainer that dabbles in sensuality and sexuality but doesn’t explicitly do anything. That’s something I play with, but when I recognize it I push the other direction.”

John Jasperse also plays with that line. When I interviewed him for Dance Magazine before the revival of Fort Blossom, with its famously nude male duet, he said he viewed the dancing body as “an aesthetic construction, an estheticized puzzle.” As part of this choreographic puzzle, the groin area is exposed almost haphazardly. “But then there’s that moment where the slightest thing shifts and suddenly you see a sexualized body and you have to ask, What was it that suddenly changed it? And then, Why suddenly when I look at it I’m really aware of things like defecating and urinating and getting sick and dying, that’s largely a medical relationship to the body? My perception continues even now to slide around. 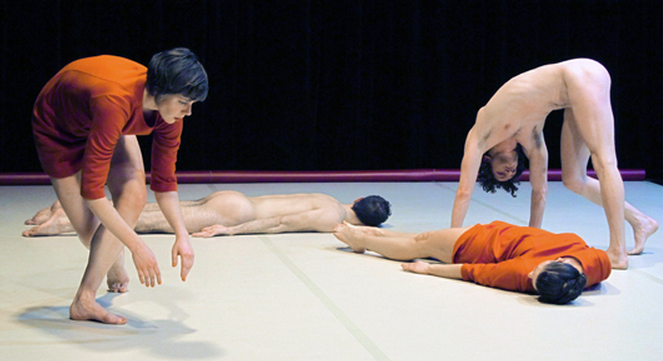 “In every art-making experience that involves the public, you’re handing over this space of perception and you aren’t in control of it. And the interesting thing is the way in which it slides from one axis to another. For some people I think the men’s duet still holds a kind of trangressive taboo, which is curious to me because we all have a butt and we all go to the bathroom. Those are universal things that bind us together.”

Revealing body parts for Luciana Achugar is more about “getting out of your head.” Last year she was interviewed by Gia Kourlas in Time Out New York before her premiere Otro Teatro (2014), which was explicitly about pleasure. “That’s why my work has moved more toward this kind of animal, primal place,” she said. “I feel like dance in contemporary culture has a power to connect us differently to our being and…part of that is to take power away from directing with your head …So the practice of being in pleasure is partially the practice of finding an aesthetic of how my body wants to move without any notion of good or bad or pretty or not pretty. An undoing of what I’ve learned.”

In some of Achugar’s work the dancer’s head is hidden—either out of sight or draped in cloth or massive wigs—while the naked crotch is exposed. “I want to have an anarchic body where there’s no place that’s more important than another,” she told Kourlas. “You can be in your bone, in your tissue, in your muscle—where making a shape is where you want to be, or you can be flowing or grounded or curled up.”

Part of a Larger Shift?

Of course these days people are exposing themselves in all kinds of ways on social media. Maybe no parts are “private parts” any more. So, is the downtown dance world in tune with the mainstream on this matter? Welll, maybe it’s distantly related. Then again, this new openness may go even further back. The sexual revolution of the 1960s, the feminism of the ’70s. the punk style of the 80s, and the culture wars of the 90s set the stage, as it were, for the current forms of liberation. So perhaps this is another phase in that direction. But also, this new frankness could be seen simply as exploring new territory—the territory of the body that, as Jasperse said, is universal.

Below is a photo of the work of Melinda Ring, who gives a workshop at Movement Research May 2. 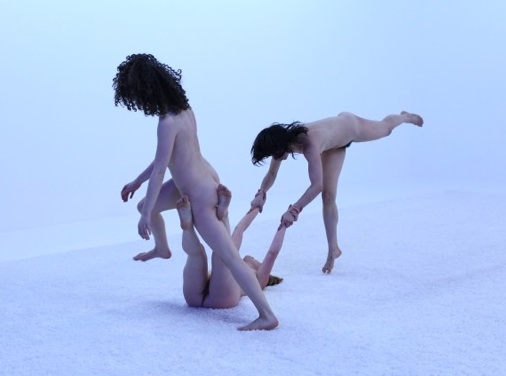