When it comes to stories, ballet relies on fairy tales, modern dance sets the heroic individual against the group (e.g. Limón, Graham), and postmodern tends to fragment narratives into shards that keep you guessing (e.g. Bill T. Jones, David Gordon). All of these approaches can yield great works.

But David Roussève has given us a real story from the real world. His new Stardust, seen recently at Jacob’s Pillow, packs an emotional wallop. Projecting words in the form of text messages on the backdrop, the story unfolds as the confessions and prayers of a gay black teenager named Junior. Almost as abused a character as Precious in Sapphire’s Push, Junior has the illusion that the recipient of his texts is a friend—or a god. He desperately wants to be loved, and he’s so locked up inside that he’s unable to cry. His only pleasure is listening to the songs of Nat King Cole, which accompany sections of Stardust.

The opening scene lays out the parallel tracks of verbal story and dance with a pacing that allows us to absorb both. While we are introduced to Junior, the boy who vents his feelings through texting to god knows whom—or maybe just god—the 11 dancers of David Roussève/REALITY stand equidistant, facing front. In unison they fluidly pass through a series of moves that includes tapping the chest in agitation or desire, leaning way over to the side, and suddenly collapsing the chest as though all hopes are deflated. Somehow, this field of continuous motion, together with the brash, self-hating yet defiant texting, draws you into a darkly tender mood. This piece has something to say and it will take its time saying it. 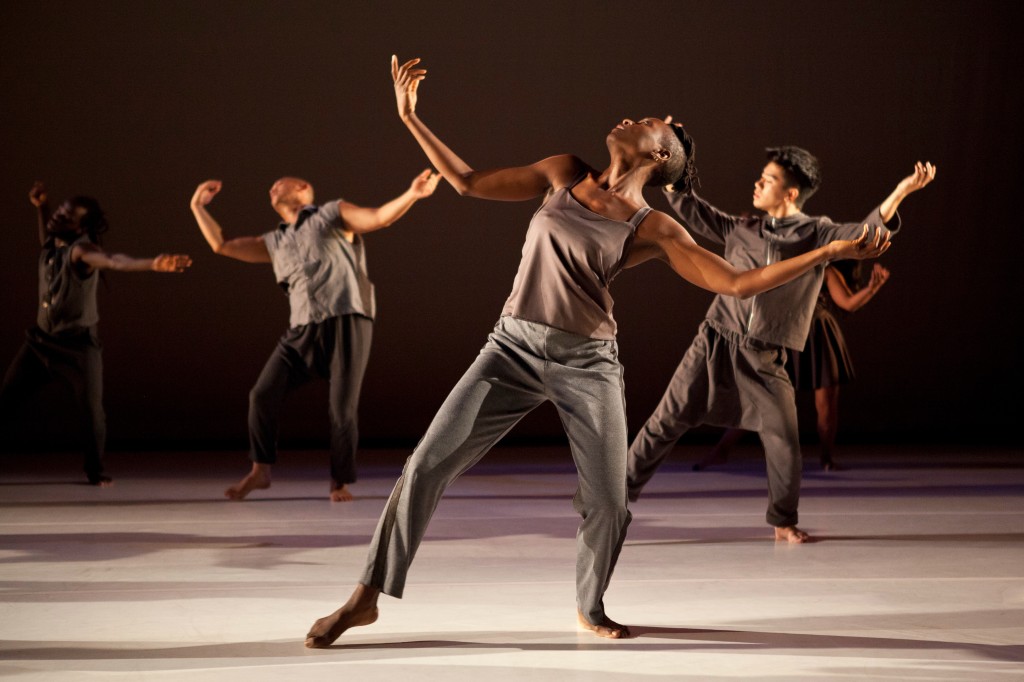 The choreography never illustrates the harrowing text but stems from another part of the brain—another part of Roussève’s brain, because he created the narrative as well as the choreography. The performers do not act out the characters. If you look for the troubled teenaged Junior, or the girl who falls down, or the bully who wields a brick, you won’t find them onstage. But you will find a diverse group of colorful individuals who have tender feelings, frustrated feelings, and uncontrollable urges. One of the amazing scenes is a scream-fest between Taisha Paggett and Emily Beattie where they yell at ear-piercing volumes into the other’s mouths at point-blank range. In another scene Charisse Skye Aguirre flails furiously as though trying to rid herself of every thought and feeling she ever had—while an animation of a bird flies up toward heaven on the back screen (spiritually-tinged video by Cari Ann Shim Sham). They are not acting out Junior’s story but their states of mind have an affinity with his search for love and god. 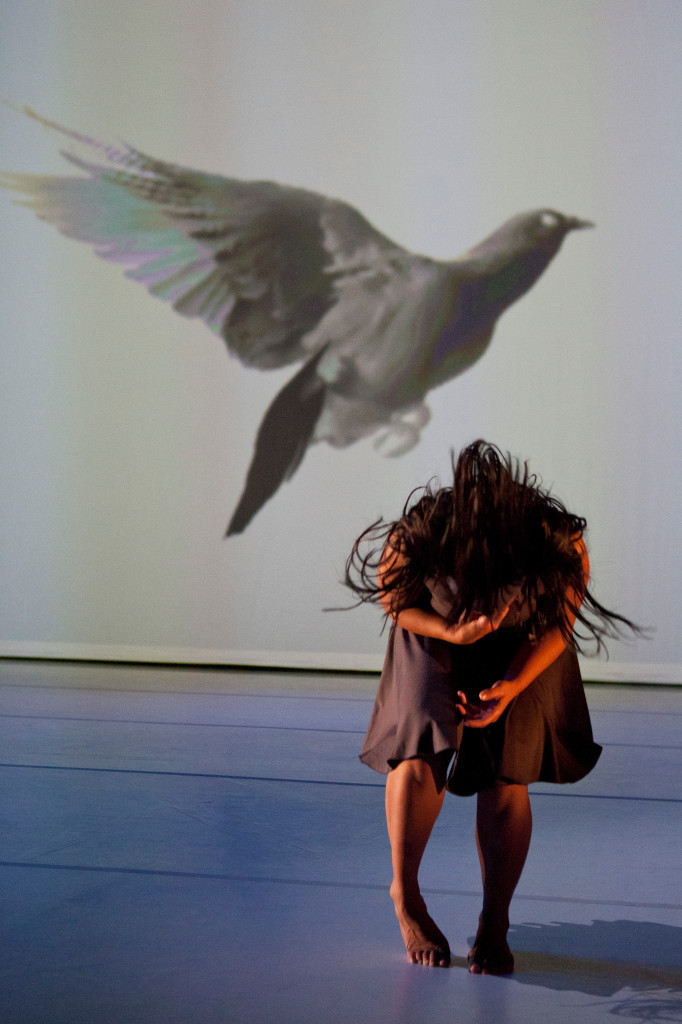 The one character who is identified clearly is Junior’s grandfather, played by Roussève with a rusty voice from beyond the grave. The only source of love and wisdom in Junior’s life, he appears on a wheeled-in small screen to approximate the Skype experience. In a brilliant twist, Roussève-as-grandfather tells Junior on Skype that he is visiting him in his dreams. He repeatedly assures the boy that he has a good heart, and Junior starts looking for his grandfather in the stars. The story is so masterfully told, so full of poignant moments, that at the end you say to yourself, Ahhhh that’s why the title is Stardust!

To me the one flaw was that certain motifs were repeated too often. The chest tapping and crotch grabbing lost their power after the 10th or 20th time. The projected text, on the other hand, carried us on a narrative wave that created its own momentum. With the final episode, I found myself choking back tears. This was a tragedy—but with a grain of uplift.

One thought on “The Power of Story: David Roussève”