With the help of Tchaikovsky, my body got swept up in the glorious sequences of Serenade. This was last Friday, when Kaitlyn Gilliland taught part of Balanchine’s choreography to a bunch of downtown types at the Danspace Project. The workshop was part of Claudia La Rocco’s brainstorm, Platform 2015: Dancers, Buildings and People in the Streets.

The platform and the workshop

I think Edwin Denby would have been happy. The platform was inspired by Denby’s three-point dance interest in the ’60s: Balanchine, Cunningham, and Judson Dance Theater. La Rocco’s curiosity led her to pair Balanchine dancers with post-Cunningham dancer/choreographers. 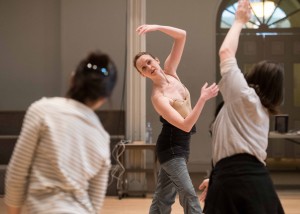 Gilliland, a beautiful young dancer who couldn’t quite fit in at New York City Ballet, is now freelances with smaller groups. But during her years with NYCB she danced Serenade many times, often as the Dark Angel.

Gorgeous torso movements, like a big side bend or an undulation in parallel that travels up the spine, are what give the ballet its wind-blown look. Although my legs don’t work like they used to and my feet cramp up when I try to point my toes, my upper body felt those shifts as pure pleasure. As you opened your sternum upward to the stained glass window in the dome of St. Mark’s Church, you felt like you could touch divinity—or at least George Balanchine. 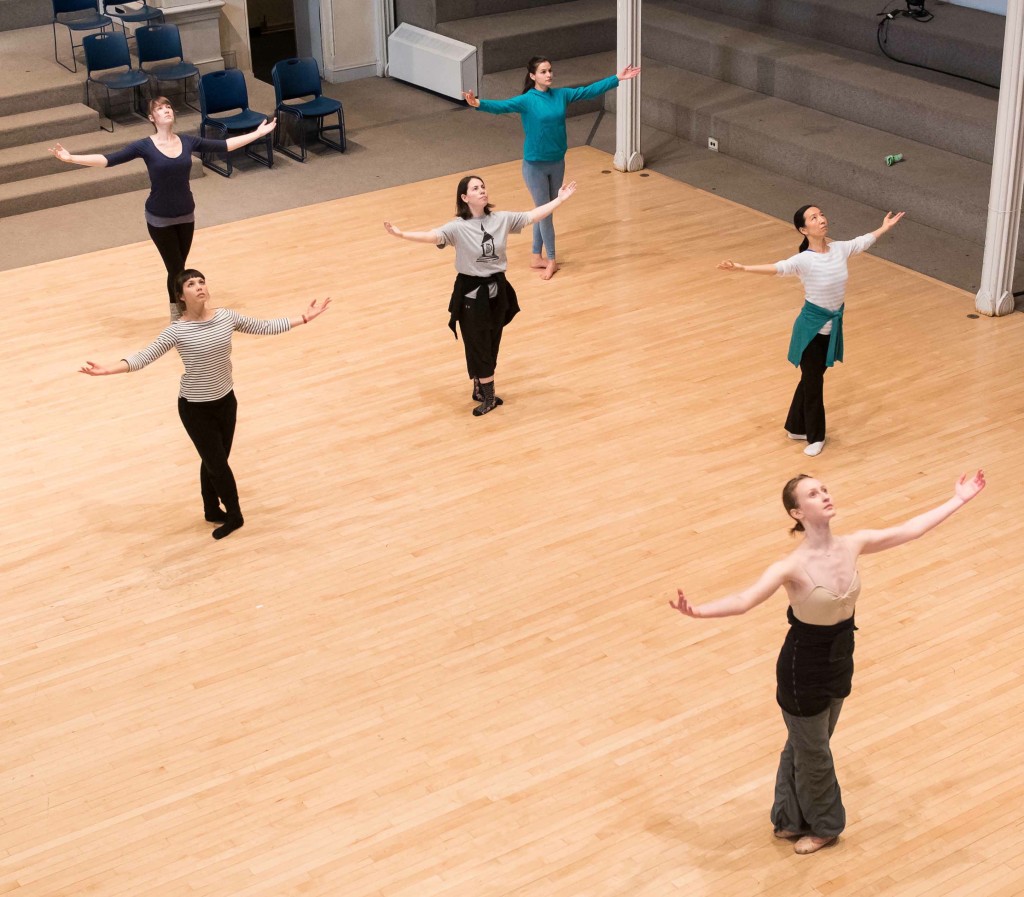 But wait—I’m a modern dancer 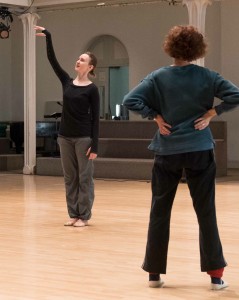 Kaitlyn demonstrating, me with hands on waist, photo by Ian Douglas

However, I am (or was) a modern dancer and choreographer, and although I grew up training in ballet, there were some things in this workshop that my body/mind refused to do. One is what I call icky fingers. Kaitlyn explained that all fingers in ballet should be separate. Well, I spent enough time as a teenager at the School of American Ballet sticking the pinky out, that my adult hand just wouldn’t do that. Also, I think icky fingers are a gender thing: most ballet men hold their fingers loosely together rather than feathering them prettily.

At another point Kaitlyn advised us to squeeze — I think that was in relation to the legs having to suddenly open from parallel to first. I blurted out, “We don’t squeeze downtown.” As Janet Charleston put it later: “We don’t squeeze but we engage.” It’s a different way of articulating muscle usage, and a different aesthetic.

Common ground between ballet and modern

But there were other aspects of Kaitlyn’s workshop that a modern dancer could relate to. When she described being centered as making constant adjustments, and showed us how she keeps moving even when standing in place, I thought, That’s Steve Paxton’s “small dance.” When she waved both arms to the left, seaweed style, it looked like an Isadora Duncan movement that found its way into Michel Fokine’s Les Sylphides. (Fokine was influenced by Duncan at the time he made that famous ballet). 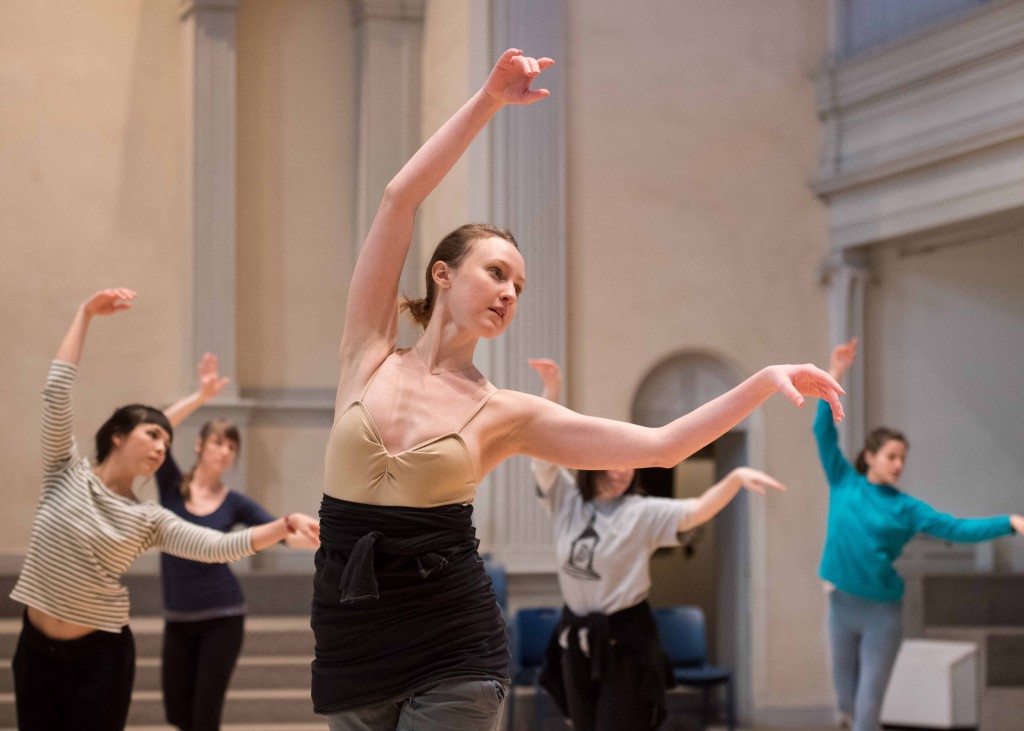 Surprisingly, since so much of Serenade is in unison, Kaitlyn taught the steps with leeway so you could decide certain details for yourself, like the exact the moment you change your focus from your hand to your lower left. She was more interested in us having a sense of purpose than being in perfect unison. (Yay!)

When answering our questions, Kaitlyn had a quiet wisdom. She kept everything fluid, whether it had to do with shifting direction from flat side to éffacé, or how she felt about working in a hierarchical company. Her answer to the last question was, It changed every day.

When I think about Balanchine ballets, Serenade is never far from my mind. I once moderated a panel on the ballet for SAB, and I collected quotes from Suki Schorer, Wendy Whelan, Brian Reeder, Lourdes Lopez and others. Earlier this year, when I posted “Start the New Year with Serenade,” I had no idea that I would actually be able to learn some of it.

Last year, for added ghostliness of Serenade, I concurred with Elizabeth Kendall’s hunch that the ending (when one dancer, lifted high up, opens her arms to the heavens) was inspired by the mysterious drowning death of young Balanchivadzes’s dance partner at the Imperial School.

That theory didn’t come up in the workshop, but the grandeur of those steps to that music could easily stem from some deep spiritual questions. The choreographer came to this country in 1933, nine years after the drowning and his departure from Russia. Couldn’t that tragedy have had a lingering effect?

Everyone has a story about Serenade. Kaitlyn read an email on her iPhone from Sterling Hyltin, a principal at NYCB, that painted a lovely picture of the ballet as an ocean setting.

Now, after learning a few of the steps and hearing more stories, I can’t wait to see Serenade at New York City Ballet again.