When two dancers performed an excerpt of Arpino’s Light Rain (1981) at the Youth American Grand Prix gala last week, I was happy to see it again. I was grooving on the rhythm—there’s a really strong hold after the first percussive beat—and the sexy, sinuous movement. I love the way, after many repetitions of that staccato rhythm, the music starts swirling and so does the choreography. It was performed with tantalizing boldness by Beckanne Sisk of Ballet West and Fabrice Calmels of the Joffrey Ballet.

At intermission, I ran into a friend who said she found the duet over-the-top raunchy. “Too many hip rolls, and that last position is—” she used a word that meant it did not belong in a theater. The New York Times review pretty much echoed her reaction. 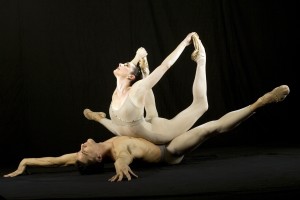 Valerie Robin and Fabrice Calmels of the Joffrey in Light Rain, photo by Herbert Migdoll

That last position of Light Rain’s central duet is, to me, no more suggestive than some of the moments in Balanchine’s Bugaku or Kylián’s Petite Mort. Don’t most 20th-century pas de deux have an erotic component anyway? I started thinking about why something strikes one person as tasteless and not another. There are certainly times when I felt a piece was tasteless, for instance I tend to react that way to Boris Eifman’s work though I know the Russians adore it. So why did I not feel it with Light Rain and should I feel guilty for enjoying it? Does perceiving taste or tastelessness have to do with time and cultural expectations?

During the 1980s Light Rain was a big hit for the Joffrey Ballet. It showcased the super articulation of the dancers—not just in arms and legs, but in the pelvis too. It had a brazenness that was part of what marked the Joffrey as unique. With pieces like Arpino’s Sea Shadow (1962) and Trinity (1970) and Robert Joffrey’s Astarte (1967), the Joffrey was the sexy ballet company. (Of course, it was also the historic ballet company, what with its major reconstructions of Nijinsky’ Rite of Spring, Massine’s Parade, Jooss’ Green Table, and more.) Light Rain was well matched with the trippy music (by Douglas Adamz and Russ Gauthier) and well crafted in each of its sections. Audiences loved it—just as they did last week at the YAGP gala.

Perhaps when the Light Rain duet is taken out of context of the Joffrey rep, it’s more susceptible to charges of tastelessness. And maybe we’re not used to seeing such pieces at the Koch Theater, which after all is the house of Apollo (i.e. Balanchine). But then again, sometimes it’s satisfying to see a ballet that blithely crosses over from Apollonian to Dionysian territory. 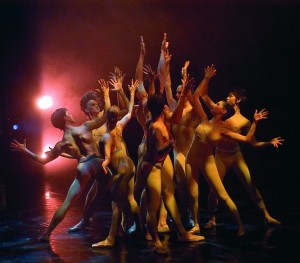 The Joffrey Ballet in Light Rain, photo by Herbert Migdoll