The Ailey season at NY City Center continues to January 4, but the “All New” program that I just saw appears only two more times: Dec. 26 and 28. In Hofesh Shechter’s Uprising (2006) seven men crouch, crawl, and pitch forward in a crazy run with arms behind them like scorched wings. The ambience is menacing. A hug turns into a battle; a pat on the back in a circle of guys erupts into a slap fest. They move along the floor like hungry animals. The places invoked veer from a gym to a street protest to a prison. It’s a staggering work, and the Ailey dancers pull it off with vigor and the right touch of occasional humor.

For a certain kind of gender balance (a hair’s breadth away from stereotyping), Jacqulyn Buglisi’s Suspended Women (2000) depicts privileged 19th-century women trapped in their own femininity. A. Christina Giannini’s voluminous dresses give the dance an aristocratic feeling. The 15 women form a sisterhood but when four men enter they become agitated or jealous or evasive. Linda Celeste Sims, as always, lends passion and dignity to the proceedings. 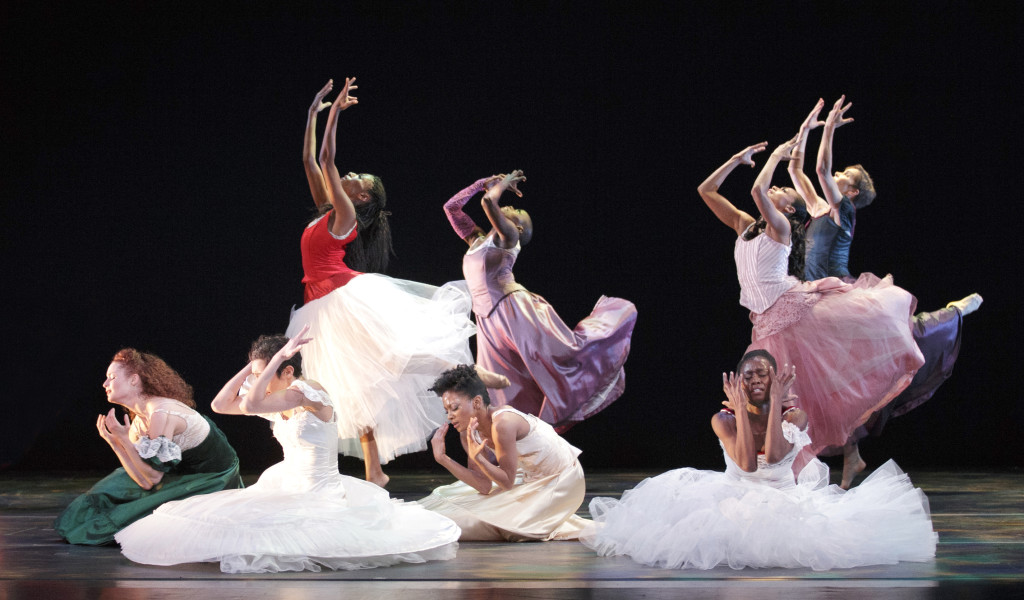 The power of Matthew Rushing’s world premiere Odetta stems not from the choreography but from the subject, the dignified singer who had marched with Martin Luther King for Civil Rights era. During the ’60s her majestic voice was a plea for justice, peace, and freedom. Hearing the recording of her “Masters of War” brought me back to the anti-war fervor of that time. 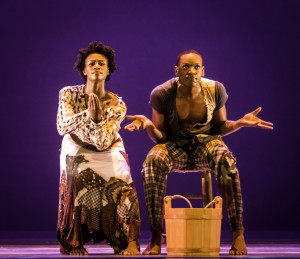 However, it’s a lighter moment that is the highlight: a charming duo to the song “A Hole in the Bucket.” What a surprise to hear Harry Belafonte’s inimitable voice along with Odetta’s! (The recording is from 1960.) The skit between Jacqueline Green and Yannick Lebrun charmingly depicts a rural couple sassing each other.

The Ailey company is so bursting with talent that one can always discover new favorites. In Uprising, Rinaldo Maurice wriggled through the choreography with an enchanting mercurial quality. In Odetta, Jeroboam Bozeman was gripping in the “John Henry” solo, and Megan Jakel hurled herself through the “Glory, Glory” section with abandon.

To see get tickets for the rest of the Ailey season, click here.