You will never see a ballet as funny as Jerome Robbins’ The Concert. Made in 1956, it captures the daydreams of a group of appealing neurotics during a Chopin concert played live on the piano. We see their flights of fancy: the young lady who tries on different ridiculous hats, the hilarious Mistake Waltz, the cigar-chomping guy who dreams of stabbing his wife, and the umbrella scene. The umbrella scene—so whimsical about the state of uncertainty and the state of loneliness. (Brian Reeder told me in this Choreography in Focus how touched he is by the hint of melancholy in that scene.) One could say the ballet looks dated, but it’s choreographed with such brilliant craft that you may be noticing how each scene builds as you are giggling uncontrollably. 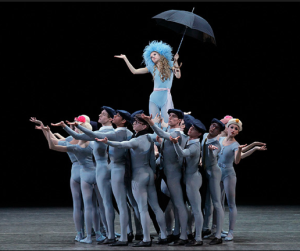 The Concert. Homepage photo of by John Ross.

The Concert is paired with Glass Pieces, which always blows me away with its kinetic subtlety and power. Starting with what looks like random sidewalk traffic, the choreography gets swept up in Philip Glass’ momentum. Sandwiched in between these two masterworks is Op. 19/The Dreamer, which, I have to admit, I have not yet unlocked. But hey, Tiler Peck and Robert Fairchild are dancing it together on two nights, so that’s all I need to know. May 9–10 and 18–19. Click here for tickets. 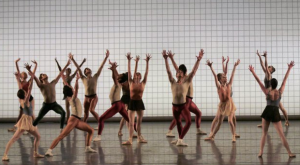