The Grand Union was a pivotal improvisation group that was unforgettable for downtown dancers in the 1970s. This short-lived collective broke every rule in the book, opening up a chaotic field of possibilities for any adventurous performer. It was an amazing collection of individuals—Yvonne Rainer, David Gordon, Trisha Brown, Steve Paxton, Douglas Dunn, Barbara Lloyd Dilley, among them—and maybe it was inevitable that the group would be pulled apart by the force of such strong voices.

I recently heard a sideways crack belittling the Grand Union that sent me into a tizzy of wanting to mount a defense. It was made at the last “Bill Chat,” and later I realized that not much is known about this group that, from 1970 to ’76, gave the most daringly unpredictable performances around. 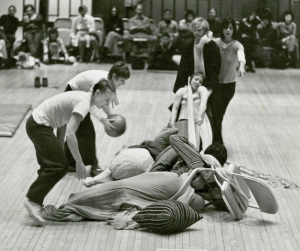 Last month I watched some videos of the Grand Union at the Getty Research Institute that confirmed for me how groundbreaking they really were. (Another set of the same videos is lodged with the Fales Library and Special Collections at NYU’s Bobst Library.) The wit, the hedonism, the way absurdist motifs accumulated, the uncanny sixth sense the performers had about each other, the sheer imagination spurred by spontaneity, have not been matched since. 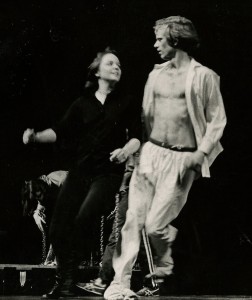 The Grand Union grew out of a group piece that Yvonne Rainer was working on with fellow dancers from Judson Dance Theater. At a certain point she decided to forego her leadership role and make the group into a collective.

In 1976, I wrote this about them: “We follow their triumphs, disappointments, dares, and frustrations almost too keenly to be bearable. We feel the challenge of spontaneity, the chaotic assortment of possibilities as we do in our own lives. We know that there is no plan. We witness the trust that allows them to bring their personal doubts into play.” (The whole review appears in my book.)

Even better, listen to what Trisha Brown said about performing with the Grand Union in Sally Banes’ book Terpsichore in Sneakers: 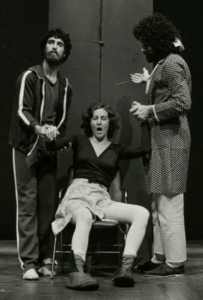 “It was my intention to deliver an unpremeditated performance each time. The blank slate approach.…There was no way to do something wrong in the Grand Union, improvisation includes error. In the beginning, we were raw and the form unformed and I never knew what was coming next. Steve Paxton arriving with a burning candle installed on his hat symbolizes that period for me…Subversion was the norm. Everything was fair game except fair game. We were ribald…Hilarity pervaded…There were time lapses, empty moments, collusion with the audience, massive behavior displays, pop music, outlandish get-ups, eloquence, bone-bare confrontations, lack of concern, the women’s dance, taking over, paying deference, exhilaration, poignancy, shooting one’s wad, wadding up one’s wad, making something out of nothing, melodramarooney, cheap shots, being oneself against all odds and dancing. Dancing and dancing and dancing.” 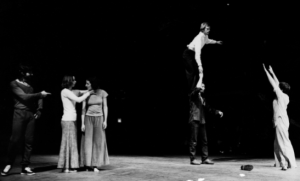 Because Trisha and the others broke from the group to develop their own work, it petered out in 1976. There are no big anniversaries of the Grand Union to celebrate their accomplishments. Just those videotapes…and whatever people can recall. So I asked some Facebook friends for their memories:

Stephanie Skura I remember admiring the way they’d spontaneously set up a situation & courageously stay with it so it became honest high drama of a sort.

Lisa Kraus They were like high-wire artists. Quite fearless and utterly committed. Something interesting was that they reviewed their shows by watching the video afterward. They studied the choice-making—there was method in the madness!

Irene Borger Yes. The wit of them. The slowed down playful family feeling of them.

Jody Oberfelder I remember sitting up in the balcony of La Mama, legs dangling over the edge, marveling at the quick-witted choices made in the moment. There seemed to be no leader, but humorous and bristly attempts to take over. Situational, yet non-narrative. Familial, and like families, functional and sometimes dysfunctional.

Margaret Eginton I remember laughing out loud and wondering how you got to be so good at improv. We had improv twice a week [at Sarah Lawrence College], but not quite like that!

Cathy Appel I was an older student at SLC, but tuned in to the Grand Union around the same time Meg did and was blown away! Fell in love, too. I would run out immediately to see them tonight if the Grand Union was miraculously performing again!

Lois Welk I remember going to a performance of the Grand Union, smiling through it, enjoying the playfulness. I remember dry humor, great freedom, and lots of props.

Pat Catterson Off the top of my head, seeing Becky Arnold with a papier-mâché globe over her belly when she pregnant at the Whitney in Continuous Project—Altered Daily, the piece that led up to the Grand Union. Seeing Barbara Lloyd and Steve Paxton crawl through a very long tube of pink material at Eisner Lublin Auditorium and emerging at the other end naked having removed their clothes along the way. Their slapping on a Dylan song on a phonograph player and, arms around waists, Nancy and David jogging in a circle to the music around the space. Yvonne, I think she was pretty stoned, being passed along the laps of the audience prone I think at the 14th street Y. It was toward the end of her time with them. I remember the performances they did while Yvonne was in India, and I was in one in which David had a bunch of us who took Yvonne’s classes on Greene Street do his “sleeping” piece. I remember a show at 112 Greene when some pals began playing harmonica and the GU frolicked to it. I remember the kids Ain Gordon and Maia Garrison, whose mother Roberta Garrison [who had danced with Elaine Summers] was often at those shows and Barbara’s son Benji sometimes wanting to get in the act. I remember a bit when David kept saying “I’m going down” and doing a slow-motion fall…and lots more…. 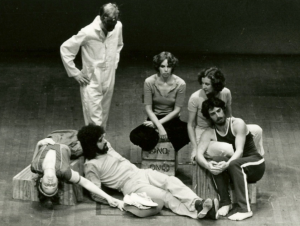 One thought on “Equal Time for the Grand Union”