I am honored to conduct the one public interview that the Bolshoi’s artistic director is giving while he’s in NYC. In Sergei Filin’s first trip to the U.S. since the horrific acid attack that nearly blinded him, he is here is to serve on the jury of Youth America Grand Prix, with which he’s had a long relationship. My talk with him will be a pre-performance event Friday, April 11, on the Promenade of the Koch Theater open to all who have tickets to the 15th-anniversary gala that same night. 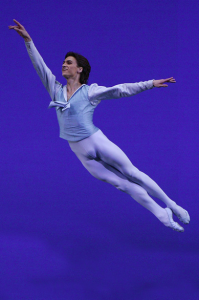 Sergei Filin in Tschaikovsky Pas de Deux, 1990s, photo by Damir Yusupov @Balanchine Trust. Photo of Filin on homepage was taken by me in 2012.

Looking back at my interview with him a few months before that attack, it seems that things were going well, though he knew some dancers were unhappy. But no one could have anticipated the savagery of a hit-man throwing acid in Filin’s face.

In the intrigue that followed, there was a lot of reshuffling at the Bolshoi. During Filin’s medical leave, a “committee” was put in charge, which raised certain questions. Both the general Bolshoi director, Anatoly Iksanov, and notoriously outspoken dancer Nikolai Tsiskaridze lost their jobs. (Tsiskaridze has taken over as director of the hallowed Vaganova Ballet Academy.) The dancer accused of plotting the attack, Pavel Dmitrichenko, was sentenced to six years of hard labor, later decreased to five and a half.

Things have quieted down a bit, and now we can look forward to the Bolshoi returning to NYC in July.

So, for all those who have tickets to the final YAGP gala—and it will be a blowout, star studded gala—I hope to see you there. For more info on the gala and to buy tickets, click here.