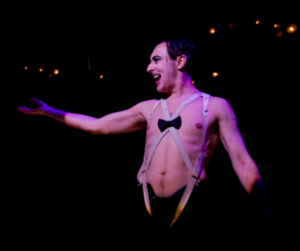 In the tradition of Fosse dancers Ann Reinking and Bebe Neuwirth, Cumming’s body assumes highly designed shapes in which each detail expresses volumes. A mere crossing of the hands overhead suggests revelry, the curling of his fingers suggests appreciation of beauty, a sudden squat speaks of squalor. His face is a collision of expressive modes: smirking, childishness, calculation, hedonism. He lurks and prowls, enjoying his effect on the audience. He’s a stage animal. 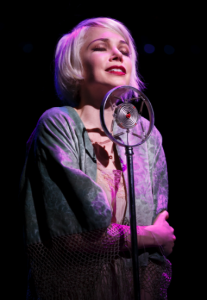 On the other hand, Michelle Williams, who has been so alluring in her movies (Take This Waltz, Blue Valentine, My Week With Marilyn), shrinks a bit from the stage. The camera loves her face for its vulnerability, sensuality, and honesty—and she projects those feelings in Cabaret too. But her body somehow comes off as less than the sum of its parts. It’s not the shape that’s a problem (she has nice legs and good proportions); it’s the energy. Any one of the chorus girls puts out more physical energy than Williams. Dancers are trained to communicate with every inch of their bodies. And that is accomplished partly by projecting pleasure in one’s own body. 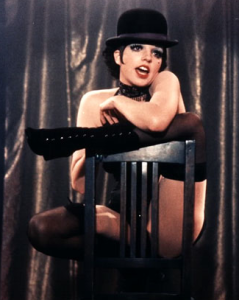 That sense of pleasure is what’s missing from Williams. Just look at this YouTube of Liza Minnelli in the song “Mein Herr” from Cabaret.  She’s free, she’s brazen, she’s loving entertaining and lapping up the gaze. She’s exquisitely conscious of her power over the audience. She’s part of the recklessness and obliviousness that led up to Nazi power. She’s a danger zone.

Of course Liza was equally comfortable on screen and onstage, so maybe it’s not a fair comparison. And Williams is a very different Sally Bowles from Minnelli. She plays it more like the late Natasha Richardson did. I’m guessing here because I didn’t see the Roundabout Theatre Company’s original version in 1998, but this article spells it out.  Richardson too was called “brave” (as Williams was called in this review by Ben Brantley)  and played it as though she wasn’t really a professional entertainer—apparently more like the character was originally written by Christopher Isherwood. 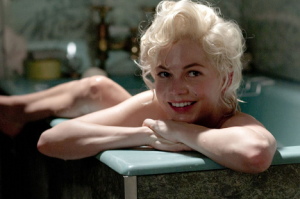 That shrinking in her portrayal of Sally Bowles  (I think it resides in the shoulders) wasn’t in evidence in My Week With Marilyn. She allowed the camera to come to her, to discover her. But when you’re onstage, you can’t rely on the camera’s lens. You have to be totally, unambivalently, willing to reach out across the footlights.

So…Williams is not a stage animal and she doesn’t help build the architecture of Rob Marshall’s Fosse-tinged choreography. But, by giving a truthful, emotionally complex performance, she does contribute to the powerful story that Cabaret tells.

One thought on “Stage Animal vs. Screen Animal”