What happens when a funny guy gets serious? For dancer/actor/writer David Neumann, the recent deaths of both his parents have cast a shadow over his life and his current interdisciplinary work-in-process, I Understand Everything Better. Also on the program are more upbeat solos from the past, like Tough the Tough (Redux) and You Are In Control. The truth is, there was always something serious and searching in Neumann’s solos. Under the bumbling, staggering Everyman there was a thread of existential questioning, expressed in both movement and words. A few years ago, Neumann was brilliant in the Beckett program he shared with Baryshnikov, revealing an affinity for that absurdist/serious playwright. Before that, he brought a sharply quizzical quality to the roles he played in works by Big Dance Theater and Jane Comfort and Company. 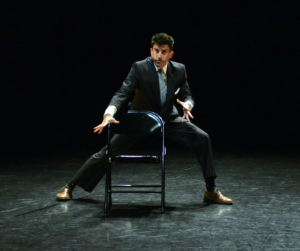 This evening is co-presented by Jacob’s Pillow, which has presented Neumann before with great success.  April 26 at MASS MoCA’s Hunter Center for the Performing Arts. For tickets, call 413.662.2111 or click here.

The final work I Understand Everything Better comes to American Dance Institute in Rockville, MD in March, 2015 and Abrons Arts Center in NYC April, 2015.

Like this April 25, 2014 Wendy PerronAround the Country Uncategorized what to see 1

One thought on “David Neumann”