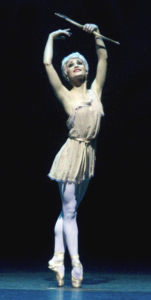 Sarah Lane as Queen of the Dryads in Don Quixote, photo by Gene Schiavone

Usually the word “star,” when applied to ballet dancers, is reserved for principals. But at American Ballet Theatre, there are three female stars who are still at soloist level. I mean real stars: They light up the stage, they are mature in their artistry, and they are unmistakable individuals. They just don’t have the rank or hype to go with it. I’m talking about Sarah Lane, Misty Copeland, and Stella Abrera.

These three women each have such a magnetic presence onstage and dramatic range (not to mention sterling technique) that they could be top ballerinas at any other company. I think ABT audiences would be happy to see them in lead roles. 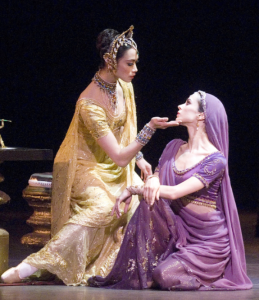 Lane has a sweetness and vulnerability that Ratmansky used to advantage in his latest premiere for the company, The Tempest. As Aurora a few years ago, she had the most natural radiance and sense of wonder of any of the ABT ballerinas. She was majestic in Tudor’s Shadowplay, where she’s held aloft as a celestial figure. And she was fresh as a breeze in Les Sylphides. 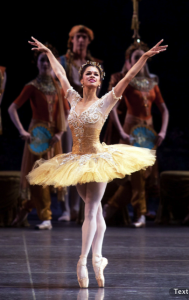 Copeland has a strength that makes her look invincible, which is why she was such a good choice for Ratmansky’s Firebird. Her sense of shape is highly defined—and she’s got a fire too. As Mercedes in Don Quixote, she ruffles her skirt to jazz everyone else onstage. As a harlot in Romeo and Juliet, she’s bursting with mischief. In Balanchine’s Duo Concertant just this week, she infused the steps with joy and verve, and she projected the subtlest whiff of romance. She’s terrific in contemporary work too (in works by Tharp and Marcelo Gomes). 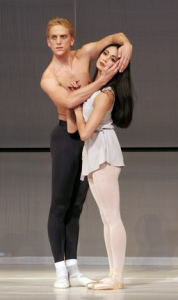 Abrera with David Hallberg in Robbins’ Afternoon of a Faun, photo by Marty Sohl, 2005

Abrera’s fullness in slow movements takes my breath away. As the Queen of the Dryads in Don Quixote, just opening her arms from high fifth was an event to witness. She absolutely sparkled in the first movement of Symphony in C recently, and I’ve seen her tear around the stage in crazed grief as Lady Capulet. In Ratmansky’s Seven Sonatas, she alone of the six original dancers embodied the subtle hints of narrative.

I have been continually knocked out by these three stars for years. Of course when casting and promoting dancers, there are factors I know nothing about. So this is not a complaint. But from an audience point of view, I would be thrilled to see any one of these ravishing dancers as Giselle, Juliet, or Odette. 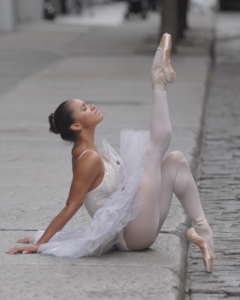 Misty Copeland in a shoot by Weiferd Watts

One thought on “Star Power at Soloist Level”