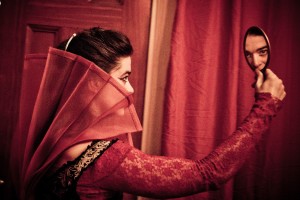 At the beginning of Then She Fell, an immersive performance in a Brooklyn church, a man playing “the doctor” reminds us of all the meanings of the word falling: Falling down the stairs, falling ill, falling in love. The audience of 15 is sitting in a tiny room in a Brooklyn church. This little speech, delivered by a young man so cluelessly serious he put me in mind of Professor Peabody of Rocky and Bullwinkle, helps us feel like we are entering pleasantly endangered territory. The mysterious wines and liqueurs we are offered also help.

The dancers playing Alice, the White Rabbit, and the Mad Hatter—even the Red Queen—are not as intense as the characters in Sleep No More, the more blockbuster example of the new immersive theater. There is no violent thrashing against ceilings or murder in a bathtub. But the smaller, quieter, Bessie Award-winning Then She Fell, has its own rewards. First of all, audience members get to be themselves, not masked. You are guided here and there like a patient in an elite hospital, and it gradually dawns on you that you are part of the performance. You are not one of the white masked masses that surge through Sleep No More, but you might be just a windowpane away from the Red Queen grabbing her bottle of pills. Or you might be invited to play poker with—was it the doctor?—after he tells of a dream where the streets keep changing. 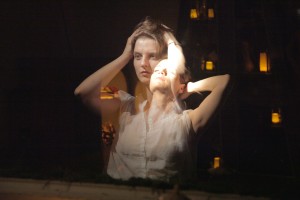 Then She Fell, with Marissa Nielsen-Pincus and Tara O’Con as the two Alices. Photo by Rick Ochoa

Secondly, there is a literary component that comes at you in fragments, and it’s left to you to connect the bits and pieces. With more than 20 rooms and audience members being led in different directions, you don’t encounter the same scenes as your fellow spectator. One scene that hooked me was where the two Alices almost merge in a two-way mirror, reminding me of the haunting, identity-confusion scene in Bergman’s film Persona. Another was the Mad Hatter giving dictation in a room littered with thousands of such failed attempts. He tries to dictate a letter, scampering nervously all over the room, never getting beyond the first few words. The letter seems to be about a break between Carroll and Alice. (We learn earlier that her mother put an end to his visits.) As the woman taking dictation tries to get it right, I am reading some of the myriad scrapped letters that have accumulated in piles—traces of many shows past.

The intriguing thing was hearing and seeing bits of writing by Lewis Carroll. You get a sense of the weirdness of Carroll’s obsession with Alice but also the vastness of his literary output. 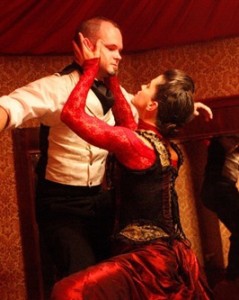 While the story of Lewis Carroll and his young friend Alice is one cornerstone of Then She Fell, the site itself is another. The piece was first produced in a hospital (thus the doctor) but it moved to this site, The Kingsland Ward at St. Johns, last year. The building housed Occupy Wall Street a century after it was built. Tom Pearson, one of the three originators (the other two are Zach Morris and Jennine Willett) said to me after the show, “I love the architecture, the culture of what’s underfoot, the smells and touch. We call it all topography and it grows roots in all directions.”

I don’t understand the math, but with audiences of only 15, and a cast of about 8 doing two shows a night, somehow this production is holding its own financially. Happily, it is here to stay for months to come.