After I posted my Monday Dance Magazine blog about  the amazing Asian women who have danced with the Martha Graham Dance Company, I received a message informing me about the other gender. David Hochoy, longtime director of Dance Kaleidoscope, Indiana’s premiere contemporary dance company, told me of the Asian men who danced for Martha: Henry Yu in the mid-70s, Young-Ha Yu in the late 80s, and himself, from 1980 to 89. It was Hochoy’s specialty to impersonate Martha at the company’s annual “Graham Follies” gathering—more on that later. 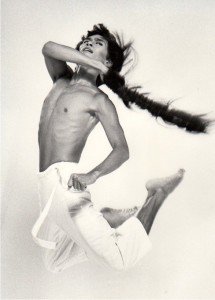 Hochoy also filled me in on the topic of her liking to be mistaken for an Asian, which I had only heard about second-hand. Here is what he said:

“I’ll tell you a story that she told me one afternoon in her apartment. She was young and on tour with the Follies. She was in Atlanta and walked into a Chinese restaurant. The waiter, who was Chinese, said to her ‘You Chinee!’ Martha shook her head. ‘Yes, you Chinee!’ the waiter insisted, and brought her special food. Martha delighted in being taken for Asian. Which is not surprising because at Denishawn they worshipped the Orient and all things Asian. I think she thought of herself as Asian.”

And of course, there was the Asian man Isamu Noguchi, whose spare set designs did so much to complete her vision. Actually performing with those austere works of sculpture, though, was a different story. Artistic director Janet Eilber has written a humorous article revealing that dancing on them was “teeth-grindingly, bone-achingly uncomfortable.” 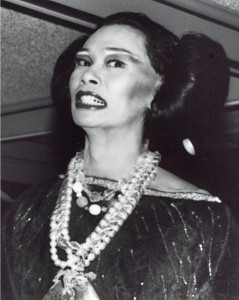 Someday, I hope to see David Hochoy do his rumored-to-be-wicked Martha impersonation. In this photo from Halloween 1988, it looks like Martha finally got to be Asian.

One thought on “When Martha Got to Be Asian”