For Americans, it’s hard to imagine what it’s like to dance under threat of rockets. But this is what’s going on in Tel Aviv right now. Performances in the Varda Studio at the Suzanne Dellal Center, Israel’s main hub of dance, have been disrupted by warning sirens. This is where Batsheva Dance Company is performing Ohad Naharin’s astonishing The Hole twice a night.

Last Saturday the audiences in the Varda Studio had to evacuate twice before the 9:00 show, due to two sirens—with rockets booming in the distance. I emailed one of the American dancers in the company, Ian Robinson, to ask what it’s been like from his point of view, and he sent me this message:

Hi Wendy,     It’s true, the tensions have been rising this week. The siren warning of rockets en route make me ask, how much adrenaline can I produce? At the moment this is reality. I am not in fear, but should I be? It looks like normal here in tel aviv except for those moments a few times a day of hearing a siren and taking cover. It’s difficult to articulate emotionally from this perspective, so I will give you facts… 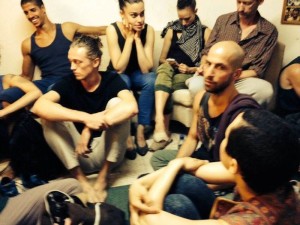 One show this week is especially unforgettable. Hamas reported they would send rockets at tel aviv at 9pm, the same time the second show was supposed to begin. The audience was in ‘the hole’ when the siren went off about 9:15. They evacuated to the safe room downstairs in the costume department, as did the dancers. We sat. The atmosphere was both rational (what are the chances of a rockets hitting right here?) and fearful (what if?), experienced and fresh, trying to keep the morale positive and alert; selfies were taken….We heard a few loud booms outside, presumably the iron dome intercepting the projectiles, and the sirens stopped.

Most of the audience returned to their seats and our company manager told us to take a few moments before we would start the performance. We did. I think it was a good show.

I believe I have discovered something more about ‘state of mind’…how to control/manage mood, fantasy, effort. It is something dancers constantly work on.

All in all, this situation sucks. What sticks with me is my passion to dance.

For a hot minute, it looked like a cease-fire would be possible. But that didn’t happen, so the rockets keep coming. My heart goes out to everyone living in Israeli cities and everyone in Gaza.

When I saw The Hole on July 2, just before the violence escalated, it was completely riveting. I felt I was experiencing each moment intensely but found myself at a loss to describe it. I was thunderstruck. Now, somehow, I found a framework for it in an essay I read (thank you Lisa Preiss) about the psychological effects of the ongoing hostilities between the Israeli government and Hamas.

In “On Hope and Despair in the Middle East,” David Grossman, suggests that Israel feels defeated, not by Hamas, but by its own despair, its certainty that no peace process will work. I think that Ohad Naharin’s work with Batsheva is an antidote to that despair—not answering it with simple “hope,” but with a complex kind of hope. A hope that is not born optimism but of sheer vitality.

The dancers in Batsheva are curiously, individually, undeniably, vital. Fierce would be the word if it weren’t so over-used. Their vitality is revealed in a kind of interior life, whatever is the opposite of showiness. In The Hole, this interior life explodes into a kind of animal hunger, with dancers facing their own clawed hands in one sequence. They have an uncanny ability to slip from soft to explosive without forcing it, with no forethought, just with a deep connectedness. 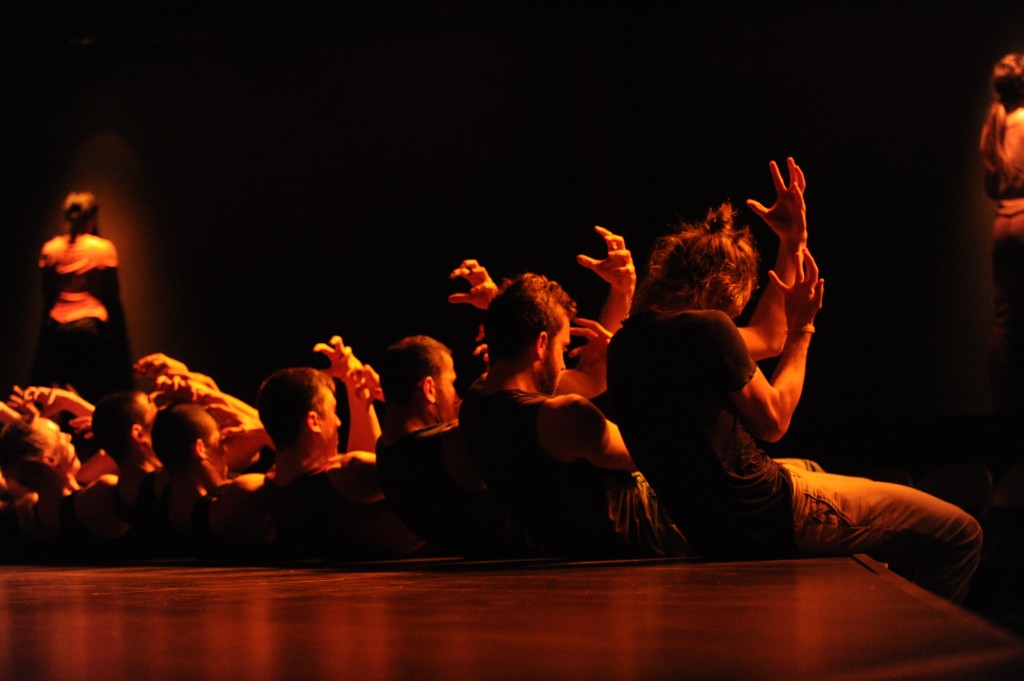 The Hole can only be performed inside Zohar Shoef’s set, created for the occasion: an octagonal platform, the audience in the round, a grid above. When the lights go up, instead of dancers appearing on the platform in the center of the space, eight women stand behind the audience on the periphery—more like a planetarium than a theater. They do small, soft gestures until, all at once, they whack the wall behind them.

The men bound onto the platform as if shot from a cannon, prowl the perimeter, and settle in a lounging pose on the edge, close to the audience. Keeping a steady gaze on audience members, they each slowly open up the left leg, knees still bent, as though to invite you into their very center. This kind of work relies on our vitality too, our ability to be open to it. 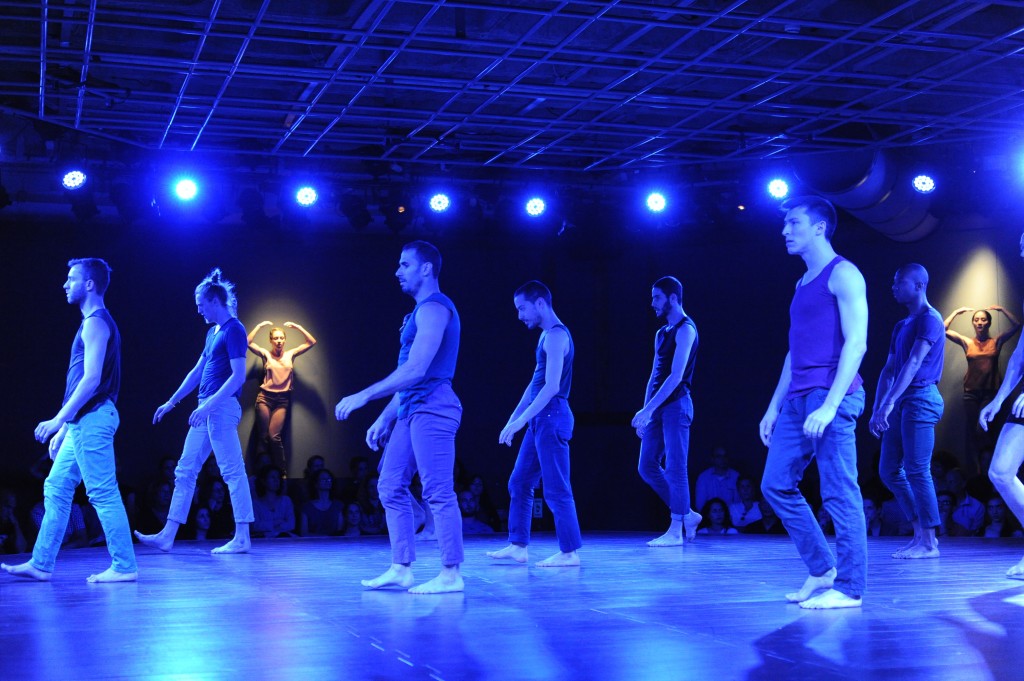 The Hole, Robinson second from left, photo by Gadi Dagon

The genders are separated, which I don’t usually like when it’s a ballet tactic—give the men the jumps and the women the pointework—but in this case it lends more power to same-sex groups. They find a pleasure in proximity that you can see in their faces and feel in their breathing.

Every move the Batsheva dancers make, every sequence, has purpose and yet is open to multiple interpretations. You gradually see/feel a stirring in the grid above the platform. Perhaps we’re in a rainforest, with soft earth below and tree canopies above that are alive with motion. Or maybe it’s a battlefield with survivors on the ground despite threats from above.

You wait for the men and women to connect and when one man and one woman do, nothing is simple. The two start waltzing together. From above—an air strike—the women throw down tiny bang snaps, those harmless fireworks that give off a satisfying little explosion upon contact. Hundreds of these things rain down on them, but they continue dancing together. (Love endures. Is that not hope?) Swings drop from above; the men sit and happily swing out over our heads…Hard-earned innocence. 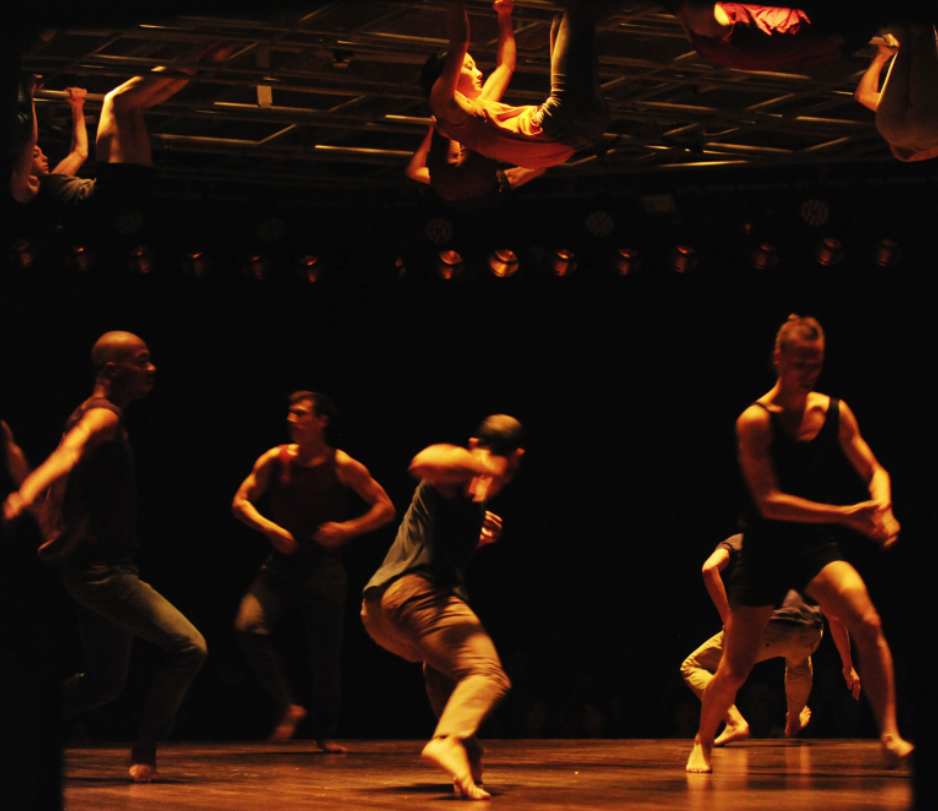 That’s the 7:00 scenario. At the 9:00 show, the genders are switched, with the men starting on the periphery and the women in the center….as if to say, Whatever you get comfortable with can be changed. But the couple who dance at the end, they keep their own parts, no switching. For me, it was a heavenly moment to watch this couple express their attraction for the second time.