The first dance Gene Kelly made for the movies was a duet with a mop. He flirted with it, stroked it, bent over it in a kiss. Then he moved on to a whiskbroom and a soda fountain, and with each prop, his steps were full of invention and humor.

This number from the 1943 film Thousands Cheer was just the first taste that his widow, Patricia Ward Kelly, gave us in her inspiring program “Gene Kelly: The Legacy,” at Symphony Space during Tap City Week. The dancer/choreographer/director was not only a beloved Hollywood star but also a major multi-disciplinary artist who helped created the American genre of movie musicals. 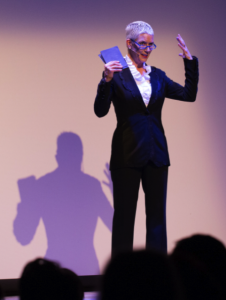 Ward Kelly’s one-woman show started with the exuberance of meeting a fellow word-lover, sharing the last 10 years of his life, reveling in the lore and luminosity of his vast career, and it ended with wistful readings. Her tone was loving but not maudlin, witty but not catty. When recalling his admiration for Judy Garland in For Me and My Gal (1942), she said, “She taught him how to angle the face for the camera, and how to kiss—for which I was grateful.” (Have you ever seen Garland dance better than in this clip from that movie?)

Ward Kelly said their 46-year age difference—she was 26 and he was 73 when they met—didn’t matter to her. “He never seemed old to me,” she said. “He was so young at heart and his mind was going 100 miles an hour.”

As a dancer and choreographer, Kelly combined meticulous planning with spontaneity. He insisted on shooting the more adventurous scenes—swinging across a Spanish-style inn on a drape, careening atop a ladder that swayed from one end of a building under construction to another—all in a single take, just to show that he did not have a stunt double. He laid down his own taps after each number was shot, matching the sounds exactly to what he had danced in his trademark loafers.

When you see one clip after another of astonishing feats or breezy dance/acting, it’s not surprising to learn that Kelly had studied Russian-descended ballet, modern dance with Doris Humphrey and Martha Graham, Spanish dance with an uncle of Rita Hayworth, acrobatics, and tap. He pulled out whatever style was necessary for the role and the milieu.

Familiar scenes like the one in Anchors Aweigh with Jerry the (animated) Mouse, and clips from An American in Paris and The Pirate, allowed you to see how the intention of every part of his body—not least, his eyes—communicates a big feeling like love or joy or sheer fun. He was a working class kid from Pittsburgh who got beaten up by other boys for taking dance lessons. Instead of a top hat and tails, he often wore his own clothes for his characters. 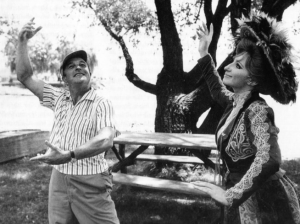 What I didn’t know was that he directed films like On the Town and Hello Dolly, and was the first American to choreograph for the Paris Opera Ballet. When contemplating how he wanted to be remembered, he enlisted Ward Kelly to write his biography. Five years into the process of his talking and her note-taking, they married.

Toward the end of her presentation, Ward Kelly read some choice pieces of nostalgia, like his funny Valentines to her and an encouraging note from Fred Astaire to him when he returned to Hollywood after the war.

After enthralling us with the range of his genius, Ward Kelly addressed the young people in the audience. “Gene didn’t want you to imitate him,” she said. “He wanted you to go beyond him.”