The most radical new work that DTH has commissioned since it’s rebirth is Donald Byrd’s Contested Space. There’s a hard, gotta-have-it edge to it that plunges these young innocents into a darker, more obsessive side of themselves. They rise to the challenge beautifully—and it’s good to see the Byrd intelligence on this coast again. (Catch a glimpse of him being his devastatingly honest self in this “Choreography in Focus.”) 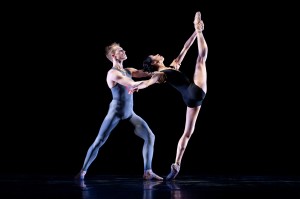 We’ll also learn a bit of history, with past-carry-forward  by Thaddeus Davis and Tanya Wideman Davis. It’s based on the Great Migration of African-Americans from the South to the North, where they worked as porters, entertainers, and soldiers. One of the interesting things about this piece is that it lists a dramaturge, the scholar Thomas DeFrantz. American choreographers tend to shy away from dramaturges, while in Europe they are quite popular.

To honor the purely classical side of DTH, the company also performs Frederic Franklin’s version of the “Pas de Dix” from Petipa’s Raymonda. Franklin, who originally staged it for DTH in 1984, had served as a mentor to this company for years. (Read Sascha Radetsky’s wonderful memory of Franklin here.)

Completing the season are resident choreographer Robert Garland’s very nifty New Bach (1999), in which the dancers shuttle between ballet steps and the Harlem Shake; and Ulysses Dove’s Dancing on the Front Porch of Heaven (1993), possibly the least serene choreography you will ever see to Arvo Pärt.

2 thoughts on “Dance Theatre of Harlem”