The coziest, coolest way to start the fall season is the four-day run at Dancenow Joe’s Pub Festival. Part of the fun is that you get to vote for your favorite, and then all four winners re-appear in an Encore on Sept 13. There is bound to be something delightful, something dark, something borrowed and something blue. 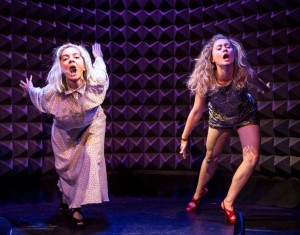 I saw the opening program last night and it was hard to pick just one fave. All the performers were engaging—and I found both old and new “crushes.” The five-minute time limit is heaven sent. If you go on Sept 13, you might see one of these from the first night.

• Sydney Skybetter got things off to a nifty start. Dancers Kristen Bell and Jordan Isadore embodied a strong beat with sharp moves in It’s Not Nepotism If You Do It to Yourself;  they were sexy in a nicely androgynous way. They could have, but didn’t replicate the “swagger” that’s so valued on So You Think You Can Dance; instead they wore slightly rumpled business suits that were refreshingly non-gender-defining (costumes by the performers). 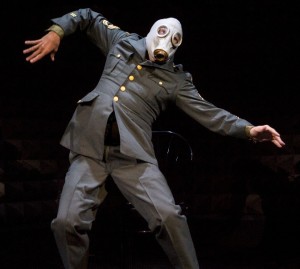 • Mark Dendy, in an excerpt from his Dystopian Distractions! Part 1, enacted a ridiculous speech by Donald Rumsfield about meeting Elvis Presley in Las Vegas. Dendy’s precise gestures were chillingly ludicrous. Wearing a gas mask (costume by Stephen Donovan), he was fascinatingly unmoored. Dendy’s a master and this was a riveting performance.

• In her swoopy, grounded dancing, Gibney Dance’s Natsuki Arai managed to be strong yet vulnerable—not unlike the poignant Patsy Cline song used for this excerpt of Gina Gibney’s Always. 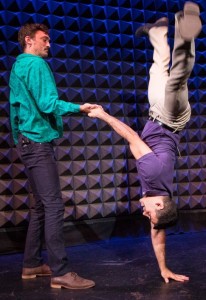 Sean Donovan and Javier Perez in Jane Comfort’s Excuse Me, But…

•Jane Comfort’s Excuse Me, But… for two very fussy characters (Sean Donovan and Javier Perez) who kept asking for their food to be perfect. The skit got funnier as it progressed, ultimately equating food attachments with all-out sexual desire, sending the audience into cascades of giggles and guffaws.

• Completely new to me was the duo Chelsea Murphy and Magda San Millan. What a couple of nutty women—in the best sense. After opening their act with mock sincerity, they swerved from apologetic to raunchy in Singer/Songwriter, surprising us with their bawdiness at every turn.

• David Parker and Jeffrey Kazin, downtown’s resident vaudevillians, ended the evening with a scintillating tap rendition of the Jackson Five classic “I Want You Back.”

For info on tix for the next three nights and Dancenow NYC’s final blowout Encore, click here.