Watching Gina Gibney whack away at a wall dividing two small studios to create a large one was thrilling. Using a gold-painted mallet, she was strong and persistent even though the wall was harder to get through than she expected. It was a perfect metaphor for what she has already accomplished at 280 Broadway, her new space on Chambers Street. The official opening in October will unveil five studios, two theaters and Lab outfitted with the latest technology, these last three to be programmed by a curator. Meanwhile, her space at 890 Broadway, near Union Square, continues going strong with eight studios, buzzing with classes or rentals most of the day. One could call this double massive center an empire—except that Gibney is the last person to be imperial. 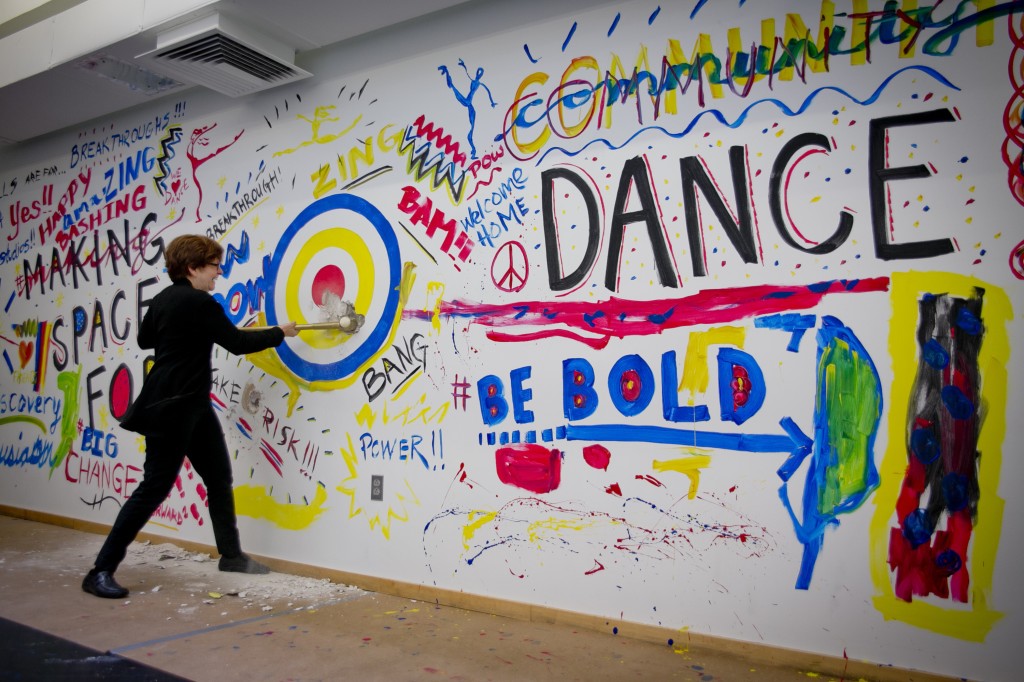 At the bash/brunch gathering on Tuesday, Gina talked about breaking down barriers, namely, the barriers of negative thinking. Before taking up the mallet, she described the former situation as succumbing to a downward spiral. She aims to build up, bit by bit, with positive energy. If anyone can do it, Gina can. Spending a few minutes with her is all you need to witness her loving care for the space, respect for her staff, and willingness to listen to all options. During her talk, she said something like, “When you work on solving a problem, you can find a solution that’s not just for yourself but for the whole community.”

That is such a generous, forward-looking philosophy that I (as somebody on Twitter noticed) called her a visionary. But the Department of Cultural Affairs saw her vision—and powerhouse competence—way before I did. Margaret Morton, former deputy commissioner of the Department of Cultural Affairs, talked about the love and brains that Gina invests in her projects. She also praised Gina’s ability to work closely with her own board through thick and thin. The DCA had been watching how Gibney operated her fifth-floor space at 890 Broadway (the same building as American Ballet Theatre); they were impressed with how steadily Gibney expanded that space from one studio to eight since 2000. The lease on 280 is for 20 years so the DCA needed a solid tenant.

The space at 280 Broadway (entrance on Chambers Street) had been designated for dance by the City in hopes of developing the cultural life in Lower Manhattan post-9/11. When DNA went under, they were in jeopardy of losing the space for dance. Last January, Morton told Pia Catton of the Wall Street Journal that the DCA “didn’t want to lose it. We put money into developing the space, and we wanted to preserve it for the dance community.”

Morton also mentioned Gibney Dance’s history of activism as bring a plus in the eyes of the DCA. The Gibney Dance Company’s mission since 1991 has been to work with survivors of domestic violence in all parts of the world. The company, which just returned from an activist stint in South Africa, has garnered support to continue giving hundreds of workshops. And Gibney has designated a room for community action training at 280—how many dance centers have that? 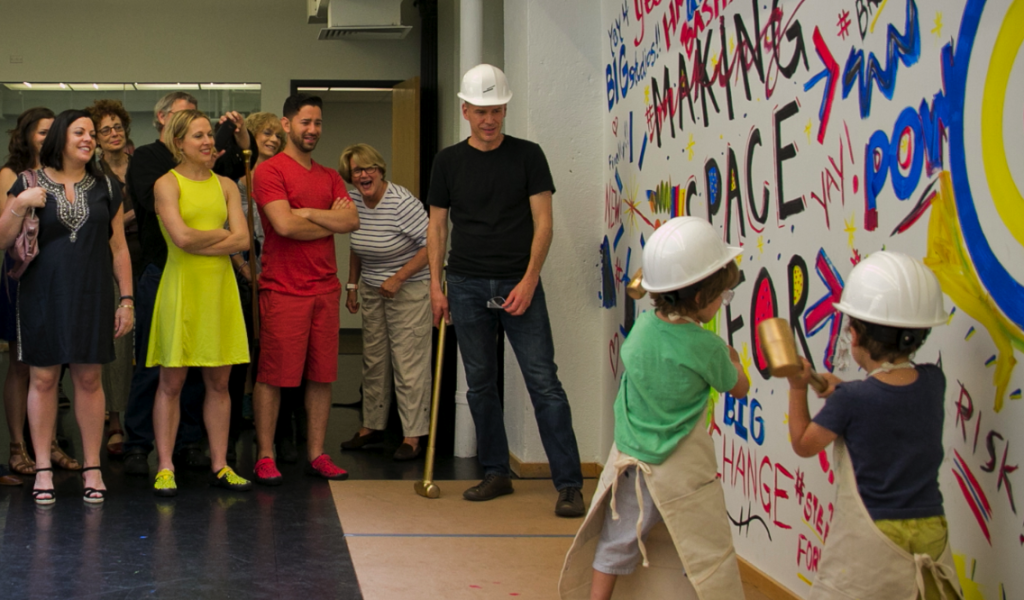 Thomas Scott, head of the board of, and his two sons, all photos by Whitney Browne (you might recognize a certain dance writer in the crowd)

The six organizational partners in this new enterprise, named last January include the Trisha Brown Dance Company, The Playground, and Movement Research.

In the spirit of full disclosure, I’ll say that I’ll be teaching dance writing at Gibney Dance in October. But in the spirit of a New Yorker for Dance, I’ll say I’m just very happy about this. Click here for more information.