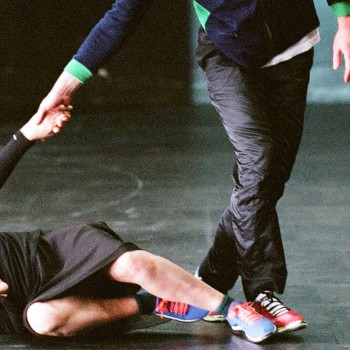 A violinist plays Bach’s second Partita on a stage that’s completely dark except for a crack of light. She leaves the stage. Silence. Two dancers break open the crack of light and start running in an arc; they are the mature Anne Teresa De Keersmaeker and the youngish Boris Charmatz. Wearing athletic shoes, they dash, jump, drag each other down, or allow a moment of playfulness. Sometimes their dancing looks like a game of tag; other times they are tethered to each other, feeling each other’s weight and age, as one circumscribes a big wheel shape on the floor. There’s a driving energy, a determination to get through all their cycles of the movement material, and yet there’s plenty of air too. To watch the shifts from restraint to arduousness becomes engaging. Catching the echoes of past movement phrases is another pleasure. The difference in age and gender serves as a point of contemplation. This is non-narrative dance at its best. It’s where the radiance of pure dance and pure Bach intersect. Partita 2 (which I saw at Sadler’s Wells in London last spring), is part of Lincoln Center’s White Light Festival, Oct. 29–30. Gerald W. Lynch Theater, John Jay College. Click here for tickets. 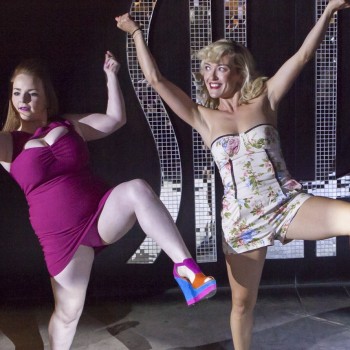 For groups that dip into the lusciously ludicrous, I vote for Ponydance. When I saw this zany quartet’s Anybody Waitin? in a tiny upstairs bar in Dublin four years ago, they crashed every idea of what good choreography is. In some ways it was more like a play, with characters who dare each other to break social barriers. But their dancing is full-throttle, top speed and, well, maybe a bit haphazard. But after a while you feel certain themes underneath. For one, the theme of waiting—although they spend no time at all standing still. This is not Waiting for Godot by that other Irish institution, Samuel Beckett. Ponydance, directed by Leonie McDonagh, is two women and two men, or, to divide it another way, three thin people and one charmingly chunky person. They pair off into same-sex duets more often than hetero; they relish interrupting each other—and the audience. In their brazenness and seeming anarchy, they remind me a bit of DanceNoise of a couple decade ago. The aggressive manner in which they coax the audience to be part of the show could be irritating but is so bold that you find yourself laughing in disbelief. They grabbed my friend and encased him in a tiny portable tent, from which he emerged wearing a scant flowery outfit.

I’m curious to see how the barroom-brawl effect in Dublin will translate to Abrons Arts Center, October 7−10. Click here for tickets.

Anybody Waitin, which is co-presented by the Irish Arts Center, is part of Abrons’ Travelogues dance series, curated by Laurie Uprichard.