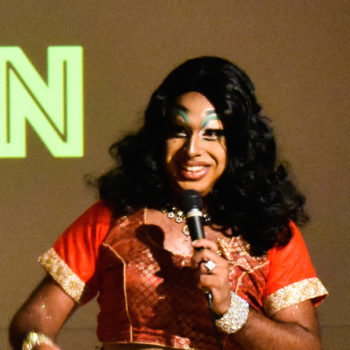 As participants in the Dance Studies Association conference at Northwestern University last weekend, we were getting acclimated to terms like transindividuated signature, Ashkenormativity, and socio-spatial tactics of de-familiarization. So you could imagine our relief when greeted by the drag hostess LaWhore Vagistan in full South Asian regalia at Links Hall in Chicago. She was brilliantly funny while flaunting non-binary gender as well as non-binary nationality. Her preferred pronouns, she announced, are “she, her, hers, and aunty.”  Bedecked in a glittering two-piece outfit and strutting in sparkly stiletto heels, she claimed that her aunties taught her that “sequins are for daytime.” She introduced the various acts of “Explode! Midwest Queer Dance Festival” with great generosity, and she applied Bollywood and Vegas skills to her own three numbers. (Check her out here. In the program notes she is identified as the alter ego of Kareem Khubchandani, assistant professor at Tufts University. ) 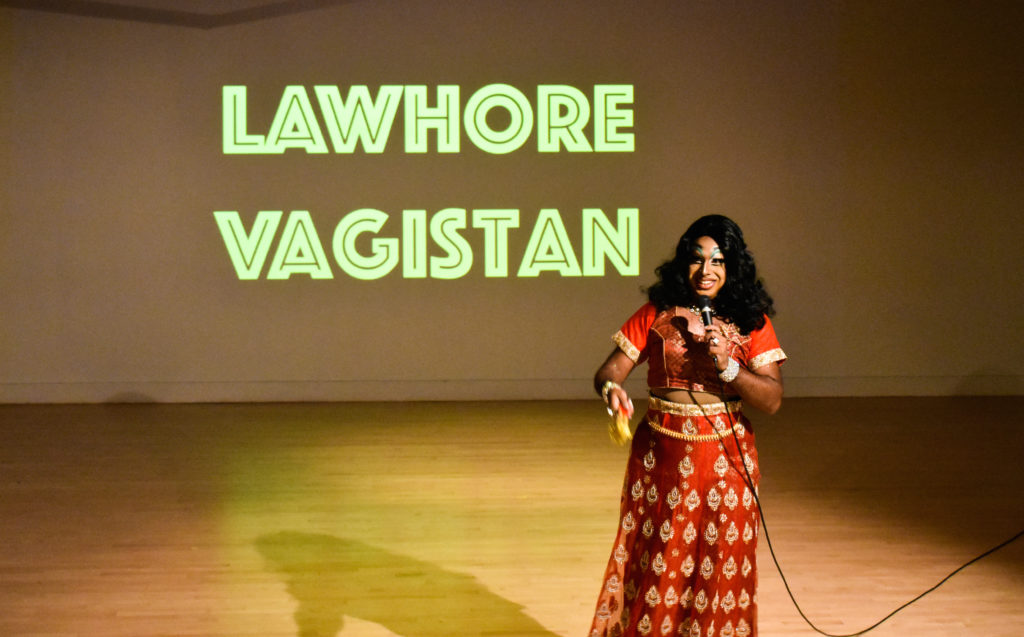 All photos by Al Evangelista 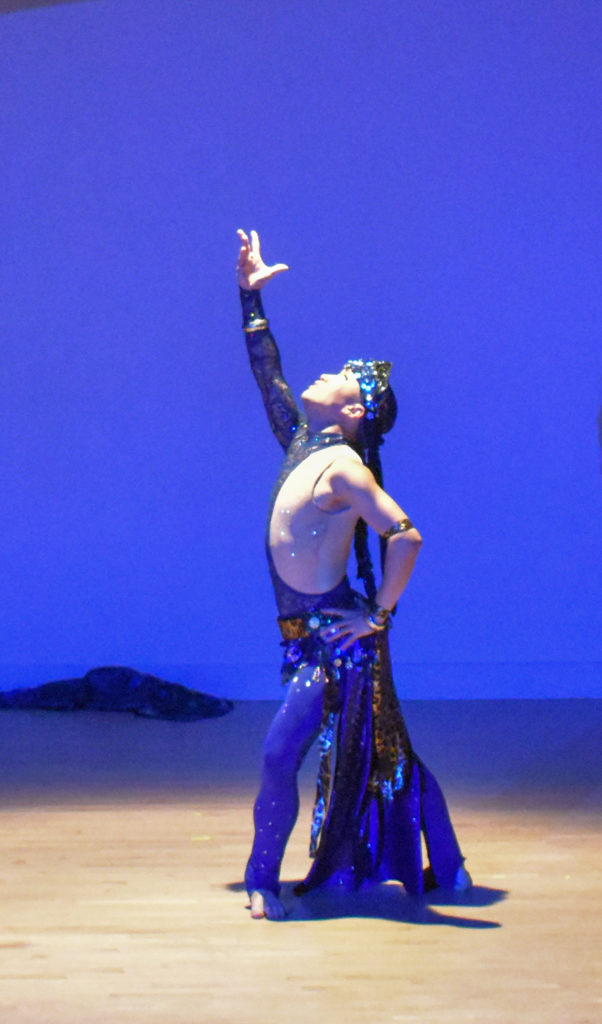 Not officially in drag but definitely androgynous, was Lee Na-Moo in his solo Nostalgia. Wearing a swirling ice-skating–type costume, he offered a display of astonishing articulation, combining filigree East Indian hands with ballet legs. A generous dose of pelvic bumps earned the genre name “contemporary bellydance fusion.” Lee Na-Moo seems not only a fusion of genders and genres but also a fusion of child/adult. There was something tender about this solo, both knowing and innocent.

Dedrick Gray performed aMoratorium: at the altar, it may not be my time, a deeply touching solo choreographed by JSun Howard. Starting on a chair, with his hand palpitating his heart, Gray allowed the movement to grow and evolve, punctuated by jolts like pouncing on top of the chair. He seemed so lost and desperate — not in a theatrical way, but in a way that made you feel you were right there with him. He staggered across the space, sometimes murmuring something like, “Why can’t you let me be myself.” After dragging himself on the ground, he clung to the chair with such a great need for touch, for warmth, that it brought tears to my eyes. This solo was a rare example of choreography and performance being unified as one. 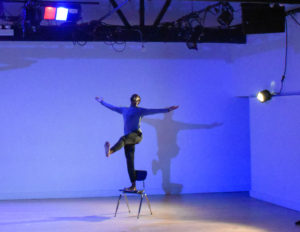 Dedrick Gray in aMoratorium: at the altar, it may not be my time

When Jennifer Monson airs her absurdist side, all is right with the world. This supremely impulsive master improviser has met her match in Nibia Pastrana Santiago, a young dancer/scholar from San Juan. In Choreographies of Disaster, Installment 3, Monson posed the conundrum, “Is it possible to dance without referencing dance?” Santiago launched into a series of almost-nothing moves that were so sneaky and self-sabotaging that we erupted in laughter. Later Monson and Santiago, both topless, smashed into each other’s body parts with awkward aplomb. The next day, when scholar/dramaturg Katherine Profeta, in her paper titled “The Promise of Common Creation in Contact Improv and Improv Comedy” quoted Ishmael Houston-Jones’ pledge to “fuck with the flow,” to interrupt the flow, I thought of this duet. 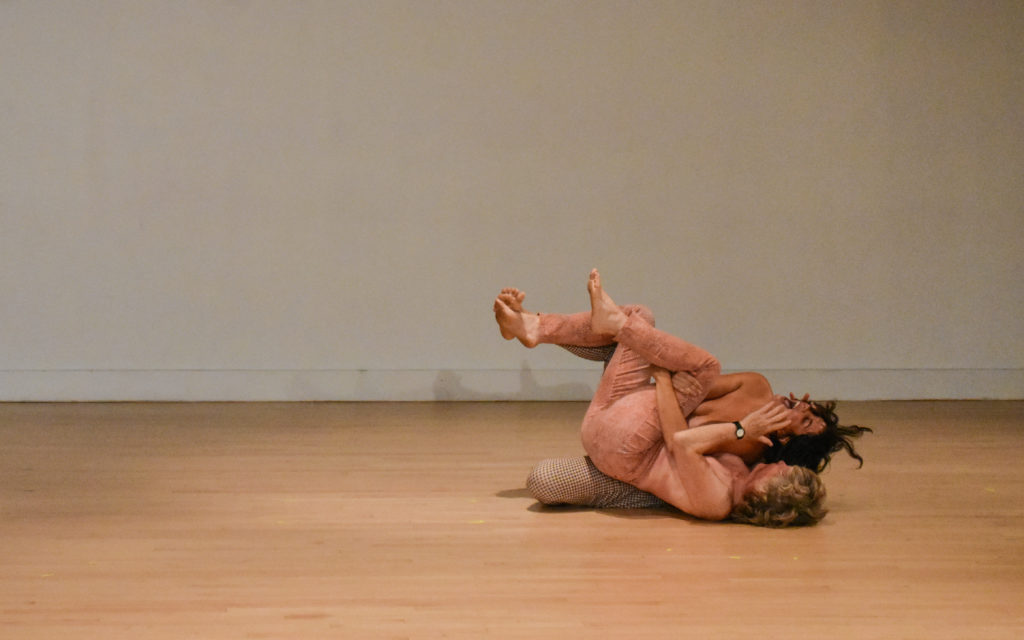 Pop Refuge, choreographed by Joel Valentin-Martinez, involved two young women, Keila Hamed-Ramos and Maddy Veitch, trying on different gender identities. The duet was notable mainly for the extravagantly, richly colored ground cloth (by Jeff Hancock) that wrapped around one woman or the other, allowing their fantasies to blossom.

We saw two habitually male Africanist forms taken over by women: a new one and a traditional one. In the former, MurdaMommy and Diamond Hardiman showed us the crazy fast scissoring of Chicago footwork. The latter was represented by the Chicago-based Ayodele Drum & Dance in Guinea Suite, choreographed and directed by artistic director T. Ayo Alston. This powerful all-woman group pounded out a storm of beats, with percussive dancing and beaded costumes to match. In the West African tradition, sometimes the drummers danced and the dancers drummed—another non-binary aspect for this LGBTQ celebration.

I close with a quote from Clare Croft, founding curator of Explode!. In the book she edited, Queer Dance: Meanings and Makings, she writes:
“Dancing queerly, when we respect it as a politics that…eludes clear definition, challenges us to think of queer as social action consciously entangled with fantasy, desire, and physical practice. As we dance, dreaming and doing are not separate.” 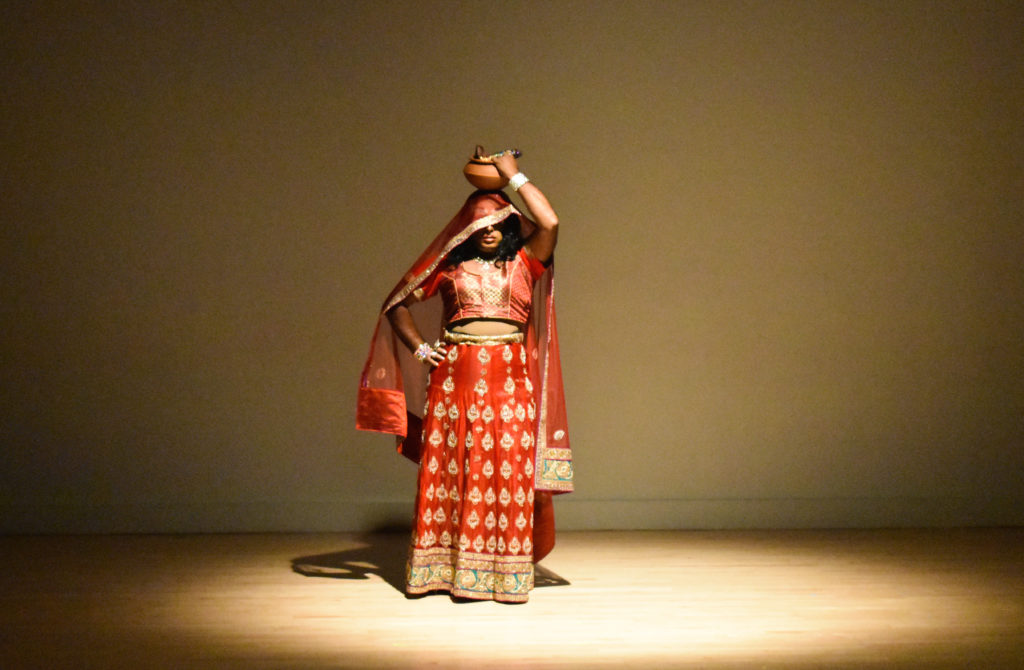